Rockies lose 8-9 in slugfest with the Diamondbacks

Share All sharing options for: Rockies lose 8-9 in slugfest with the Diamondbacks

After six months of waiting for Rockies baseball to make a return to our lives, we certainly experienced an exciting game. The only way it could have been more exciting was if the Rockies won the game. But they didn't. 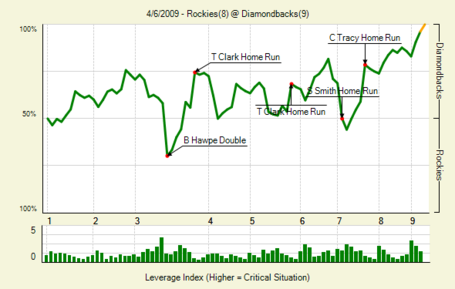 Maybe we should have guessed that this game was going to be wacky once Felipe Lopez hit a homer off Aaron Cook to start the bottom of the first inning. And then when Clark hit one, Lopez another one, and Clark another one, this game really was weird. Oh, and Chad Tracy also hit a homer. Yep, the D'Backs hit  five home runs in this game. The Rockies had only a measly three, solo shots from Troy Tulowitzki, Chris Iannetta, and Seth Smith. Tulowitzki and Iannetta hit them back-to-back to start the fourth inning. But it was Brad Hawpe (.255 WPA) who added the most to the possiblity of a Rockies win. He went 3-for-4 with three RBI and a double. The double cleared the loaded bases in the third inning.

The starting pitching for both teams was lackluster. Aaron Cook (-.517 WPA) didn't make it out of the third inning, having surrendered six runs in 2 1/3 innings. Brandon Webb (-.435 WPA) made it through four innings, allowing six runs on seven hits. So it came down to which team's bullpen would allow fewer runs, and it was the Diamondbacks'. Jason Grilli surrendered the go-ahead homer by Chad Tracy (.340 WPA) in the seventh inning.

The BIG Question: Now that the Rockies won't be any good this season, what should we do? No, no, no. That's something you're likely to see in the comments of the Denver Post's website. It's a bit too early to start thinking big questions for this team. Still, how good can this offense be?