As I predicted before the game, this game was a pitcher's duel between Randy Johnson and Ubaldo Jimenez. Through thoroughly wet and windy conditions both Johnson and Jimenez were on their game--though Ubaldo was markedly less sharp than Johnson--going seven innings and allowing four and five hits respectively. Ultimately it was Johnson (2-2) who came out with the win, giving him 297 in his remarkable career (19 against the Rockies). Johnson really was dealing tonight--I don't blame the Rockies' hitters so much as tip my hat to Randy for this one. Despite his solid effort, Jimenez took the loss (1-4).

After Johnson left though, the Rockies' bats came alive. Chris Iannetta's leadoff homerun in the eighth was one of five hits in the inning (though three were of the infield variety), but closer Brian Wilson struck out Ryan Spilborghs swinging with the bases loaded to end the threat. Wilson got four outs to record his sixth save.

Meanwhile, Travis Ishikawa and the Giants made the most of their limited opportunities against Jimenez, scratching out runs on two sacrifice flies and an RBI double by Ishikawa. 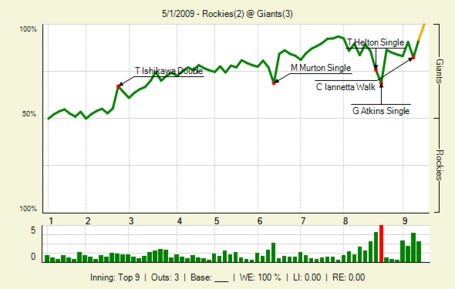 As you can see, this game was pretty steadily in the Giants' favor, though the top of the eighth inning fluctuated wildly from batter to batter.

Thanks to all 34 who contributed over 860 comments tonight. Despite the loss it was a fun thread.

Wrap Rating: The Rockies' record in one run games makes me a Sad Panda... 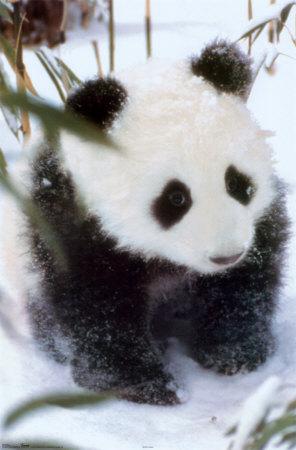