Aaron Cook (2-1) pitched six innings and allowed both runs in his final inning.  He allowed four hits and four walks and committed a throwing error which led to an unearned run.

Clint Hurdle turned to a 7-8-9 combo of Matt Daley, Alan Embree and Huston Street.  They threw three scoreless innings, allowing just one base-runner despite some anxious moments.  Embree allowed two warning track flyballs, and John Baker doubled off Street with one out in the ninth.

For the second straight day, the Rockies' offense was led by a trio with two hits.  For the second straight day, Troy Tulowitzki and Seth Smith were part of it.  Tulowitzki homered to right in the first inning and singled to right.  Todd Helton followed that with a towering triple off the scoreboard and scored on a sac fly by Brad Hawpe.  Aaron Cook scored on a Todd Helton double to center for the winning margin.  All three runs were scored off Florida starter Chris Volstad (2-2).  Box Score 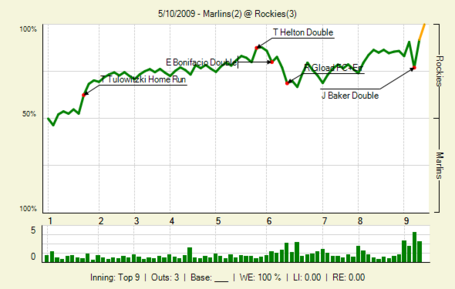 Rockies hitters finished just 2-for-28 with RISP in the series, 1-for-7 today...

Garrett Atkins went 0-for-4 with a K, 5-3, 6-3 and L5.  As he has done in every career slump, he is pulling the ball way too much.  In a related note, the only Rockies hit that was pulled today was Todd Helton's near home run off the wall in the first.  All other hits, including Brad Hawpe's sac fly, were hit to center field or the opposite field...

Troy Tulowitzki had two hits in his third consecutive game and has a 1.234 OPS since being moved to the two-hole last Wednesday.  He also tweaked his left quad late in the game.  With the off day tomorrow, he may not miss any games.

After Omar Quintanilla got his first start today, only three MLB players have yet to get a start that have been on their MLB roster since Opening Day - John McDonald (TOR), Brett Carroll (FLA), and Greg Norton (ATL).   Omar was 0-for-3 with a BB and K.

The team wearing black won all three games of the series.  Luckily, our next opponent doesn't wear black...

The Rockies have an off day tomorrow and then will face Houston Tuesday at Coors Field.  Russ Ortiz has been pulled from his start, so Ubaldo Jimenez' opponent will be Felipe Paulino