Share All sharing options for: Rockies 12, Astros 1: Colorado lefties pepper the seats and Jimenez dominates as the Rox win big

Ian Stewart's bat came to life while Todd Helton and Brad Hawpe stayed hot, and Ubaldo Jimenez pitched to form as the Rockies (13-18) cruised to a 12-1 victory over the Houston Astros.

Stewie hit two homers in the game - one a solo shot and the other of grand proportions - and was one of two Rockies who had five RBI's (along with Hawpe, who also homered). Todd Helton hit a homer and drove in two for good measure, as the Rockies churned out 12 hits against Astro pitchers.

After striking out looking in the second inning (for the fifth straight at-bat), Ian Stewart launched a 1-2 offering from Felipe Paulino into the upper deck in right field in the fourth inning, and in the next inning hit a grand slam off of Tim Byrdak to turn a 5-0 game into a 9-0 laugher.

Jimenez (3-4) went 7 strong innings, giving up a run on seven hits while striking out four. For the second straight game, he kept the walks to a minimum (1 last time, zero tonight) and got a ton of run support - something the other Rockies pitchers haven't been able to say a lot lately. In relief, Matt Belisle and Manny Corpas (both labeled bullpen goats thus far) held Houston scoreless in the 8th and 9th innings, respectively. We'll see if they are able to carry their success over to situations in which the game is less decided.

With the blowout victory (coupled with a Padres loss), the Rockies are now in sole possession of third place in the NL West. That doesn't mean a whole lot at this point, but hey - it's nice not being in last. Plus, in case you were wondering, the lopsided win improved Colorado's pythagorean record to 17-14. 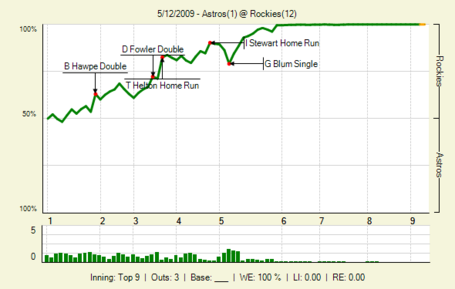