Chris Iannetta remains dreamy with grand slam, but Rockies fall 11-15 to the Astros.

Share All sharing options for: Chris Iannetta remains dreamy with grand slam, but Rockies fall 11-15 to the Astros.

This game featured a bucketload of fail for the pitchers. I mean, Jason Marquis (-.468 WPA) allowed nine runs on ten hits and three walks in 3 2/3 innings, and Glendon Rusch stayed in to save the bullpen by allowing six runs in 2 2/3 innings. Twenty four hits by Astros batters.

Anything good happen? Chris Iannetta hit a grand slam, his second of the year! He is so dreamy! Ian Stewart hit a two-run homer, his seventh, in the second inning. Ryan Spilborghs led that inning off with a triple and then scored on a Brad Hawpe single.

Oh, Troy Tulowitzki left the game with an elbow contusion and will be reevaluated tomorrow.

For the novelty of it, three runs were scored in each of the first seven innings. 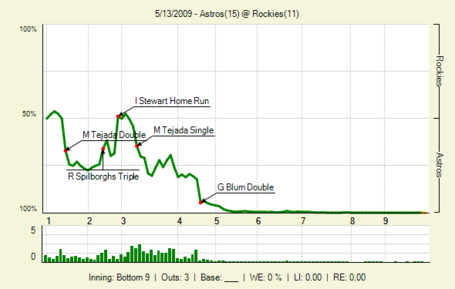