The Royal Tenenbaum award for an embellished rescue from self-inflicted wreckage goes to Clint Hurdle, who in the ninth inning realized that maybe he had the wrong third baseman. The switch to Ian Stewart proved inspired, as Stewart's lead off double in the ninth inning off of Matt Capps was followed by a two run home run by Brad Hawpe that turned a one to nothing deficit into a two to one lead. The rally has left the Rockies at 14-20, while the Pirates fall to 14-21.

Others that are deserving of praise in the Rockies 3-1 victory:

Jorge De La Rosa - with another dominant start that didn't result in a personal W, the team came through for him in the end.

Ryan Spilborghs - saved De La Rosa and Alan Embree both with his glove, once by robbing Jack Wilson of a home run off JDLR with a leaping catch at the fence, and once more for Embree by ranging deep into left to take a certain double away from Adam LaRoche with an over the shoulder running basket catch.

Rockies Pinch Hitters - Seth Smith, Stewart and Matt Murton went three for three and scored the tying run twice (the first time it was reversed on an appeal to the umpire, see the photo above) and driving in a last insurance run in the ninth.

Todd Helton - His steady glovework was also big and he's now at 1998 career hits thanks to a gift call from the official scorer on what probably should have been an error. Dexter Fowler also was the recipient of a hometown scoring decision that didn't wish to penalize the Pirates defense.

Troy Tulowitzki - his two hits and would be sac fly proved so mea ningless that FanGraphs actually blames him for most of the Rockies' hitting woes tonight (mainly the result of the reversed call on Smith's tying run), but make no mistake that a large reason that the Rockies have been looking more promising of late is getting some right handed production from him and Chris Iannetta. Tonight was Tulowitzki's fifth two hit game since May 8. He's raised his line from .198/.307/.384 on May 7 to his current .250/.349/.472.

Huston Street - struck out the side in the ninth for the well deserved save. 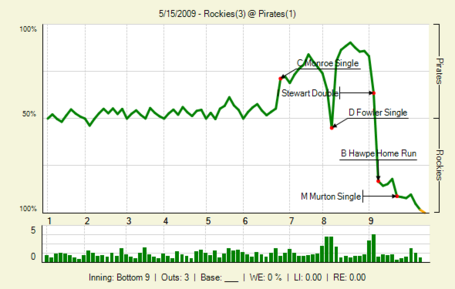