So do you think Clint Hurdle studies the German philosophers? Does he sit there thinking, "I can't experience prolonged success, I can only guess what it must feel like through the lens of my experience, which is losing. And yet it is an idea which I know I must pursue as my job seems to be based around it. Now, where did I leave my watch?" Yeah, probably not.

I guess my point is that some things on a team are probably fixable, some losses probably winnable, but some are not. Going through this 7-4 Rockies loss tonight, it just seemed to fall in the latter category. Aaron Cook struggled, but the idea of him being a major issue for the team is still one that the Rockies are unlikely to be able to face, so for now they just sort of slog through these bad starts and hope the general direction continues to trend positve. Jason Grilli has been a good soldier this season, but his was the worst appearance in relief of Cook, as he gave up the last two Pirate runs.

Hurdle pulled a slumping Garrett Atkins for Ian Stewart, who promptly put up a zero for four night, Dexter Fowler also went zero for four with three K's. Whether these performances come from Stewart or Fowler or Atkins or Spilborghs, they are clearly not conducive to a winning program, but what exactly is to be done after you flip through all the options and still bump into the same problem of underperformance each time? Start over at the beginning and flip through them again?

Tomorrow I'll write more about where the team is at right now. The Rockies seem to be in a place where losing with more frequency is to be expected and they actually seems to be a team where the sum of their parts is less than the value of the individual components. That's never where you want a franchise you root for/play for/manage/ or own to be. I'll try and look into ways to fix this as well.

At any rate tonight we're left to philosophize on why Angel Hernandez has been given to baseball fans and whether it's more nerdy to allude to dead German philosophers or sprawling epic videogames on a baseball blog we write from our mom's basement.

Kudos to Clint Barmes for being as much of an offensive hero as there was tonight and displaying his usual fine defense. Todd Helton got his 1999th hit early, I hope to get done with everything early enough tomorrow to get a chance to see #2000 live and in person at PNC. 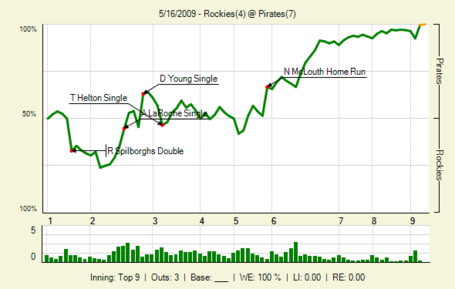