Share All sharing options for: Pirates 11, Rockies 4: Worst. Inning. Ever.

The Rockies were cruising toward their third series win of the season over the Pirates heading into the seventh, up 4-1. Starter Ubaldo Jimenez had tossed six innings, giving up one run on five hits and striking out seven with a WPA of .202, while the Rockies had gotten four runs off Zach Duke in the fourth inning.

And then came the single worst half-inning of the year by the Rockies: three relief pitchers (Daley, Embree, Corpas) combined to give up ten runs on nine hits, two errors (both by Spilborghs), and two walks (total WPA of -.866!) to not only lose the game but also to crush the collective spirits of the few optimists remaining among us Rowbots.

Looking at the FanGraph of the game, the seventh inning was definitely horrible: 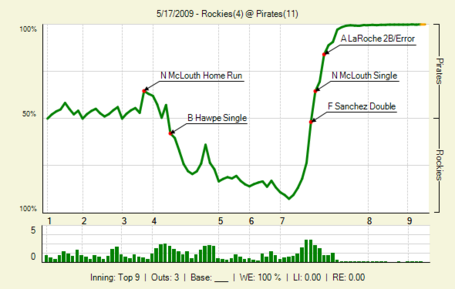 Wrap Rating: Well, I could go a lot of ways with this one, but I'll just leave it up to your imagination, Rowbots.