"Hammel Time" is taking on a new meaning.   Apparently the Rockies decide it's time to leave the gloves in the dugout.   Jason Hammel (0-3) was once again victim of a poor defense, this time when Clint Barmes bobbled a tailor-made double play ball in the third inning.

Hammel then allowed two infield hits, a walk and a screaming grounder past Ian Stewart akin to Yunel Escobar's error yesterday.   Three unearned runs scored in the inning as the Braves (19-19) beat the Rockies (15-23) by a score of 8-1 at Turner Field.

Atlanta scratched out six runs on ten hits - nine of them singles - two infield hits and just one walk of Hammel in six hard fought innings.  Honestly, he pitched better than his line and was actually quite decent.  The error and infield hits just came at a bad time, and he didn't allow a hit past an outfielder.  He has now allowed 7 unearned runs on the season, nearly equaling the total by the rest of the staff (9).

In fact, his GB/FB ratio was better than his opponent Jair Jurrjens (4-3), who held the Rockies to one run on three hits in seven innings.  The Rockies only managed to scratch out an infield hit by Dexter Fowler, a double by Clint Barmes and most importantly, Todd Helton's 2000th hit - a legitimate single lined right where he hit it last night.

Joel Peralta also made his Rockies debut and was very unimpressive.  He hit two batters and allowed three hits and two runs in two innings.  He also pulled off so sharply to the first base side after his delivery that even Brian McCann could have gotten a bunt single. 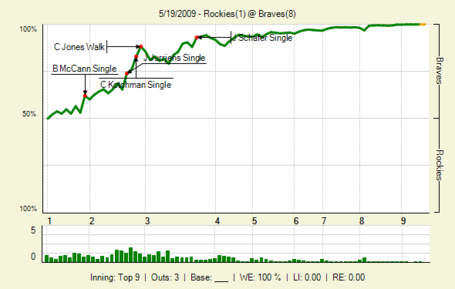 No centurions, though RMN was one off.