Rockies 5, Giants 1: Marquis and Spilborghs have their best games of the season in convincing win over Giants

Share All sharing options for: Rockies 5, Giants 1: Marquis and Spilborghs have their best games of the season in convincing win over Giants

In each of his last four starts, Jason Marquis (4-1) toed the rubber following a Rockies loss, and in three of those four starts, he got the victory.  The Rockies are now 4-1 in his five starts, beating Cole Hamels, Rich Harden, Clayton Kershaw and Matt Cain along the way.  Maybe he really is a WINNAR.

In Colorado's (9-13) 5-1 victory over San Francisco (11-11), Marquis (.342 WPA) tossed the first Rockies complete game since Ubaldo Jimenez on July 22, 2008 against the Dodgers. Going into the ninth, the former Cub had allowed one walk and four singles, and only one left the infield.  But Pablo Sandoval ended Marquis' bid for his third career shutout with a home run on his 102nd pitch to lead off the ninth.

Matt Cain (2-1) got roughed up in suffering his first loss of the season, mostly at the hands of Ryan Spilborghs (.262 WPA), who led off the game with his first career leadoff home run.  Spilly also punished Cain for giving Jason Marquis a leadoff walk in the fifth with his second home run of the day.  Just when it looked like the best Rockie OF included Seth Smith, Dexter Fowler and Brad Hawpe, Spilborghs threw a sweet wrench into the plans.

Brad Hawpe (-.063 WPA) also hit a solo home run in the sixth, meaning Matt Cain gave up as many home runs as he earned strikeouts.  That's a good formula to beat any pitcher.  Colorado now has one player with 4 HR, seven with 3, two with 2, and one with 1.  That means the Rockies are 4th in MLB in HR...without anyone having more than four.

Every member of the starting lineup including Marquis reached base...except for Seth Smith, who had the team's best wOBA coming into today. Troy Tulowitzki collected two hits including a triple in what hopefully is his annual spring thawing.  Box Score 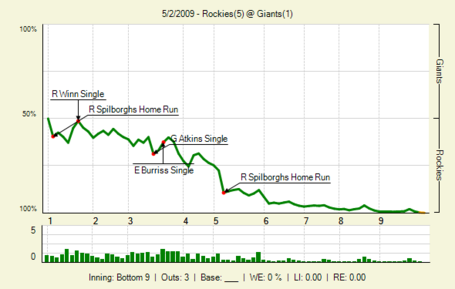 Jason Hammel gets his second start, at 2:05MDT vs Barry Zito.  And we'll have TV!  A win tomorrow means the fifth straight series win against the Giants, and the third straight at AT&T Park.

Also, if you missed out on the thread, the word "Spilly" will now replace "love" on the board.  Please update your Rowbot dictionary accoridingly or suffer from endless confusion.