[Hurdle] has repeated the phrase recently, "that it's not about feelings, it's about facts.'' That shows he's committed to change.

When I wrote that the writing was on the wall for Clint Hurdle's dismissal this morning, it wasn't just a knee-jerk reaction to the two blowouts in the prior two games, to the three out of four this week, but to the sum of what's transpired over the last four seasons (I feel the expectations for the team were too low when he began to use the first couple of seasons) and the fact that most of his moves lately seem to reflect the realization that he hasn't done enough to this point to keep his job. If I have an employee behaving like that with cuts looming, it draws my scrutiny more than anything. In Hurdle's case, he's not my employee, but if he was, I would see the 9-0 victory tonight as a big question mark urging me to ask why this hasn't been happening with greater frequency. I don't think I would be satisfied with the answer to that.

Before I get into that, though, I should point out the big positives. One, Aaron Cook pitched a complete game shutout. Two, Todd Helton hit a grand slam and finished with five RBI. Three, the starting outfield of Brad Hawpe, Ryan Spilborghs and Dexter Fowler rapped out two hits each.

Number four, and where I start to ask, "Wait a second, why is this the first time?" would be Garrett Atkins and Clint Barmes each drawing two walks off of a wild Kris Medlen and scoring four of the Rockies nine runs.

The problem is that this isn't the first wild rookie the Rockies have faced this season, but it is the first time we've seen both Atkins and Barmes displaying patience at the same time. In one of those stats that I don't know if it actually means anything, but suspect that it does, the Rockies average 6.31 runs this season when Atkins draws a walk, but only 4.45 runs in games that he plays without a BB. In the five games in which Barmes has drawn a walk, the Rockies have scored 39 runs.

That either means that it requires particularly bad pitchers to miss against these two, or that the Rockies are missing out on a significant chunk of offense this season because of their free swinging ways. Either way, it's not promising for the future unless we see some sort of sign that there's a sustainable pattern here and it wasn't just a one off against a jittery rookie.

Chris Iannetta and Troy Tulowitzki combined to go zero for nine on the night and drew just walk in comparison to the four gathered at the bottom of the lineup. 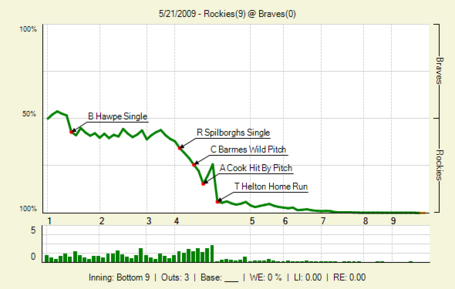