Rockies running into outs and out of time; Tigers 4, Rockies 3

Share All sharing options for: Rockies running into outs and out of time; Tigers 4, Rockies 3

The Rockies had opportunity. After doubling with two outs in the top of the third, Dexter Fowler tried to score on a Troy Tulowtizki single to left, but was gunned down by Josh Anderson at the plate. With runners on first and third and two outs in the fifth, a Fowler grounder to second killed the next hope for a rally.

In the top of the sixth, the team had what would be its best opportunity. Three straight runners reached on a staggering Rick Porcello. Troy Tulowitzki walked, Todd Helton singled, as did Brad Hawpe after a balk to score Tulo. With one run already in the bank and runners on the corners with none out, the Rockies had Ryan Spilborghs, Seth Smith and Chris Iannetta coming to the plate. Given the personnel, they could hardly ask for a better set up for a big inning this year given that Helton and Hawpe had already batted. In failing severely, they wouldn't even get to Iannetta. Spilly grounded into a 3-2 double play as Helton and third base coach Rich Dauer tried to make something happen on the contact.

The top of the ninth was the Rockies next best opportunity. Smith lined a two run homer with one out to cut the score to four to three. Iannetta, in a crucial spot where a baserunner revives the inning after the bases had been cleared, saw three curve balls from Joel Zumaya out of four pitches and simply could not connect. With two outs, the Rockies then got two more baserunners on and with pinch runner Omar Quintanilla in scoring position, Dexter Fowler could have been a hero and tied things up, but he too struck out to end the ballgame.

Helton and Fowler running into outs at home and Jason Grilli getting pulled after two batters are all further indicators of a desperate urgency by the bench staff to force wins out of this team where few seem to be forthcoming. One section of the lineup starts to perform (Atkins and Barmes were again effective on getting on base)  as another shuts down (Fowler, Iannetta and Spilborghs combined for one hit in 13 PA's and five strikeouts).

I still see this as a leadership issue. Too many players are failing or underperforming too often, or conversely having quality performances go to waste, to make it anything else. The talent level of the team isn't up to the Dodgers or league leading standards, but for the second season in a row it's failing to live up to its own standard, and that's what's most disconcerting. 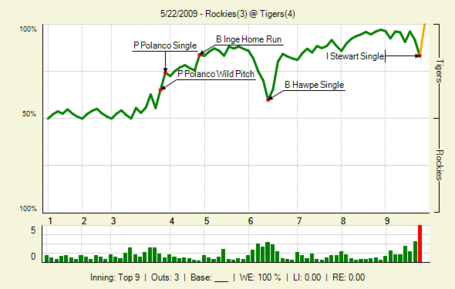