Share All sharing options for: Torrealba and Marquis lead patient Rockies to win in Tracy's first game as Rockies manager

A twist of irony on the night that Clint Hurdle was fired: in their 3-0 win over the Padres, the Rockies drew seven walks, including two by Troy Tulowitzki, who Hurdle benched for impatience two weeks ago, a widely panned move that hastened Hurdle's departure. While the three runs the Rockies scored all got on base via the free pass, they all scored via the bat of Yorvit Torrealba. Torrealba came up with clutch two out single in the second inning to score Todd Helton for the Rockies first run, singled again in the fifth (he had two of the Rockies four hits) and then his sharp sixth inning grounder that was misplayed by Kevin Kouzmanoff for a two base error scored the Rockies last two runs.

Jason Marquis battled through traffic, allowing ten baserunners himself in eight innings: six hits and four walks. However, unlike many Rockies pitchers this season, Marquis found a way to get the third out each inning without letting things blow apart on him. It helped that his sinker was particularly effective with him generating 16 of 18 outs off contact via the groundball to go along with six strikeouts. Huston Street pitched the ninth for his eighth save. The Rockies improve to 19-28 on the season with the win. 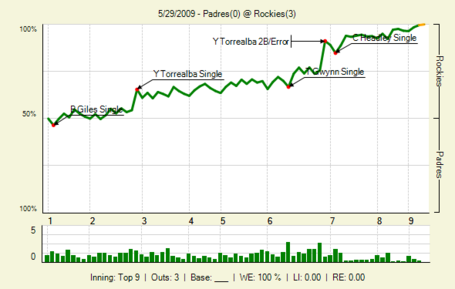