`God save thee, ancient Mariner!
From the fiends, that plague thee thus!--
Why look'st thou so?'--With my cross-bow
I shot the ALBATROSS.

Samuel Taylor Coleridge, The Rime of the Ancient Mariner

So what bird of good omen did Clint Hurdle kill to have this pall lifted from the Rockies so quickly when he was removed?

The Rockies had only won three games all season when the other team scored first. After defeating the Padres 8-7 on a walkoff double by Brad Hawpe Saturday night, they added one more. In games when the Rockies were trailing at the start of the fifth inning, the team was 2-18. They're now 3-18. The team was winless in five attempts when the score was tied going into the ninth inning and winless in six attempts to win the second game of a series after winning the first game.

Given the bloop nature of the Hawpe hit (and the way it was misplayed by Tony Gwynn Jr to allow Garrett Atkins to score from first) and the Atkins game tying dribbler past the outstretched glove of Chris Burke (who wasn't playing his best position, it should be noted) that came just prior to it, I can't help but think that any attribution to our recent change of manager for this outcome is only coincidental, but there's definitely something uncanny in the way this game only came about after Hurdle was fired.

Goat: Jason Hammel pitched as poorly as he usually does at Coors Field, but he should be grateful for his supporting cast. The team's defense was sharper than normal and certainly far sharper than the Padres have been these last two days, and a solid effort by the relief staff (Josh Fogg, Alan Embree and Huston Street) certainly helped, but the main difference tonight seemed to be getting the timely drops when the team needed them the most.

Hero: Clint Barmes did hit the ball with authority, he wound up with four hits, a triple, two doubles and a single and scored three of the Rockies eight runs, including the tying one, and drove in one more. 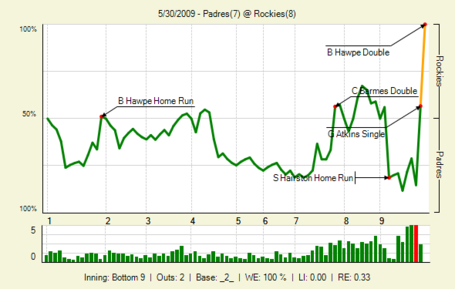