Share All sharing options for: Sunday Rockpile: Looking for the silver liners

The Rockies as a team are at a point where they have to figure out which of their young players are legitimately going to help this team be successful, according to Troy Renck's article this morning.

So far this year, the results have not been good for any of our position players. The team, which plays half of its games in Coors Field, has the fifth worst team batting average in the majors and the primary reason for this is the way everybody's been uppercutting. No NL team has a higher flyball rate, a lower groundball rate, and only the D-backs have a lower line drive rate than the Rockies. Go peruse around the batted ball leaderboards at Fangraphs and you can see how the Rockies stack up. The two quality bats that the Rockies have this season, Brad Hawpe and Todd Helton, are both hitting over 24% line drives. Seth Smith is hitting over 22% when he makes contact, and Clint Barmes and Dexter Fowler are both respectable for their positions at over 20%. After that things get more dicey.

Troy Tulowitzki is near the bottom of the pack when it comes to shortstops getting line drives, Chris Iannetta, who it doesn't matter quite as much given his power, is low on the catching totem pole in the same category. Garrett Atkins and Ian Stewart have near identical line drive rates around 15%, for Atkins in particular that's disconcerting given his career has been built on being a line drive hitter. Even in a somewhat disappointing 2008 he hit over 22% line drives.

This daily chart shows it better, you can see his line drive rate has been lower for an extended period of time in 2009 than it was even in his first full rookie season of 2005: 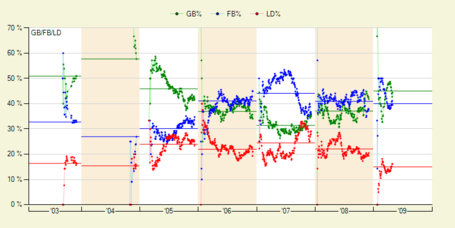 So if Jim Tracy really is really solving the Garrett Atkins riddle, we need to start seeing it in the batted ball results, and while his ground ball single to tie the game was certainly a positive for him and the team, the real proof of the pudding will be seen when he's smoking liners into the gaps again. Yesterday he had just one line drive, a hard shot right at the shortstop, but the day before he fared a little bit better with one to third and a couple of lines to the outfield he got just underneath.