They say momentum goes only as far as the next day's pitching matchup, so it's unfortunate the Rockies ran into a pitcher at his absolute best today.

Chad Gaudin (2-3, 4.76) must be angry that the Rockies didn't take a flyer on him when he was released from Chicago last month.  The red goatee (now neatly trimmed) struck out a season high nine, just two off his career high, in 6.1 stellar innings.  He is now 1-0 with a 1.59 ERA against the Rockies this year and 1-3 with a 6.35 ERA against the rest of the league.

With two outs and runners on second and third in the third inning of a scoreless game, Adrian Gonzalez came up against Jorge de la Rosa (0-6, 5.43).  Jim Tracy elected to be aggressive instead of walking the red hot slugger in favor of the ice cold Kevin Kouzmanoff.  De la Rosa had struck out Gonzalez on a fastball up and away in the first, and Torrealba called for the same pitch on an 0-2 count.  DLR missed his location, and Gonzalez gave the Padres a 3-0 lead that was all they needed.  De la Rosa allowed four runs (all with two outs) on six hits in five innings.

In the fifth, the Rockies finally started to rally with consecutive singles by Troy Tulowitzki and Yorvit Torrealba.  Jim Tracy again elected to be aggressive, calling for a double steal on a 3-2 pitch to pinch-hitter Seth Smith.  Smith watched a fastball right down the middle for strike three and Tulo was easily cut down at third to kill the inning.

In both cases, Tracy called for aggressiveness, which implies confidence in his players' abilities.  In both cases, their execution was abysmal.  The failures at those two high leverage situations really seemed to be a gut punch they could not recover from. 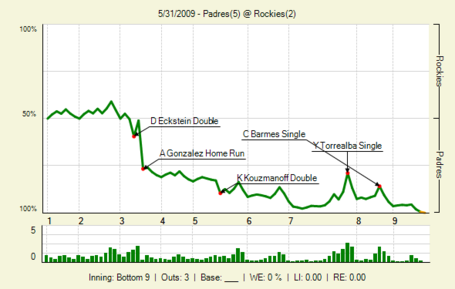 Quiet Star:
Joel Peralta gave the Rockies a chance by pitching a scoreless eighth and ninth, allowing one hit and one walk

WolfMarauder was the only centurion, with more than double the comments of anyone else.