Chris Iannetta, dreamy as ever, leads Rockies past Padres, 9-6

Share All sharing options for: Chris Iannetta, dreamy as ever, leads Rockies past Padres, 9-6

So I was writing a tag for this story. It was "dreamy". There are three tags that already use "dreamy." One of them is "zack greinke is dreamy." But no "chris iannetta is dreamy"? Well, I took care of that. Chris Iannetta is more dreamy than Zack Greinke.

Anyway, Chris Iannetta put the Rockies ahead 9-6 on his seventh-inning grand slam off of Cla Meredith (who entered once the bases were loaded). That completely turned the game in favor of the Rockies. 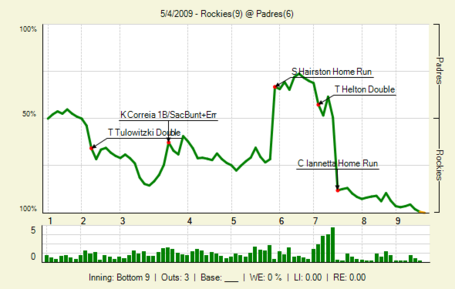 Chris Iannetta was clutch. That AB for Dreamy had a leverage index of 4.69. He came through when it counted the most, adding .387 to his .400 WPA for the game. Dude was dreamy and the bringer of doom this game. Troy Tulowitzki had an RBI double and a sac fly, while Todd Helton reached bases four times (two hits, two walks).

The pitching also turned in some solid performances tonight. The Padres were held to four hits, three off of Jorge De La Rosa. After De La Rosa left, Glendon Rusch, Matt Daley, Alan Embree, and Huston Street held the Padres to one hit over the last four innings.