Share All sharing options for: Rockies one run loss curse continues, Padres walk off in tenth.

Chris Iannetta tried to save the Rockies once more, but his lead off homerun in the top of the eighth wasn't going to be enough tonight as there was no traffic ahead of him. Two innings later, the Rockies watched another team walk off with another one run victory in what's quickly become the recurring nightmare of this 2009 season.

Brian Giles played a key role in both Padres runs. Aaron Cook pitched well after giving up one run in the first inning, throwing seven scoreless innings after allowing Giles, who had led the inning off with a single, to score on a Jody Gerut sacrifice fly.

In the ninth, Alan Embree retired one of two left handed batters he faced, and then Matt Daley came on and finished a difficult task in the ninth inning. That success would be short-lived, however, as with one out in the tent, a four pitch walk to Edgar Gonzalez and a hanging pitch to Giles that turned into a deep double to right center field allowed the Padres to celebrate another walk-off victory over the Rockies. 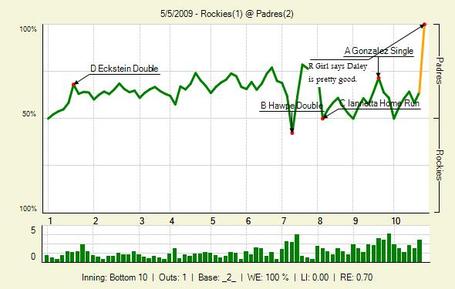