This game was pure dominance, offensively and defensively, in favor of the Rockies. Ubaldo Jimenez scattered five hits in 7+ innings, allowed a run, walked one, and struck out six. He wound up with a .348 WPA, being the most impactful player of the game. Jason Grilli relieved Jimenez after a single and double started the inning. Grilli allowed an inherited runner to score on a ground out, but allowed nothing more. Manny Corpas pitched in a no-pressure ninth inning.

And, strangely enough, Yorvit Torrealba added the most offensively with his .150 WPA. He went 2-for-2 with a homer, two RBI, and two walks. Even Ubaldo Jimenez got into the action by going 2-for-2 with an RBI, the first of his career. Todd Helton had an epic at-bat that went 13 or so pitches before he whacked a home run. Matt Murton also smacked a homer, his first. Garrett Atkins went 0-for-4 and wound up with a -.101 WPA. 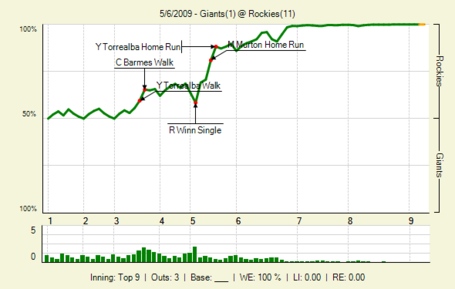 I wanted to chalk the scoring up to post hoc ergo propter hoc because I left to watch Lost before the scoring started, but the Rockies continued to score after I came back. Besides, that's a logical fallacy anyway.