This past Saturday against the Rockies at AT&T Park in San Francisco, Matt Cain gave up two homeruns to Ryan Spilborghs and five runs in total in six innings. His catcher Bengie Molina went zero for four against Jason Marquis and Rockies pitching. Five days later, the battery mates turned that performance around and gained a split for San Francisco in a short two game series at Coors Field by beating the Rockies 8-3.

Cain walked five, but played a Houdini routine by limiting the Rockies ability to make quality contact and capitalize on those baserunners. Cain finished six innings, allowing just one hit and striking out seven. Molina for his part homered twice off of Marquis and drove in four runs to put the game away early for San Francisco.

For the Rockies, the only offense they could muster came after Cain left, first by a solo homerun from Brad Hawpe off of Jeremy Affeldt in the seventh, and then a two run shot by Ian Stewart to end the scoring on the day. The Rockies drop 11-16 on the season, while the Giants improve to 14-13. 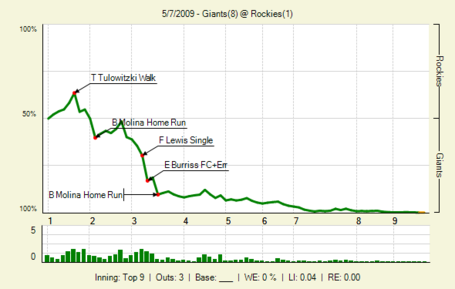