While in previous sessions of PR Academy I have lectured on the Opening Day Payrolls of all 30 MLB teams and all 818 players, with a more exhaustive look at the Rockies, this week I'm going to be taking the analysis a step further--into the wild and wooly land of payroll efficiency. I will attempt to correlate number of wins with year-end payroll over a three-year period. This data allows us to see how efficiently payroll dollars are being spent. Readers be warned, this article (and probably your computer too) may (or may not) self-destruct after it has been read, so plan accordingly.

This analysis is largely piggy-backing off Rich Lederer's fantastic Baseball Analysts article a couple of months back, using payroll data compiled by Maury Brown at the Biz of Baseball. As Brown states:

Figures are for 40-man rosters and include salaries and prorated shares of signing bonuses, earned incentive bonuses, non-cash compensation, buyouts of unexercised options and cash transactions. In some cases, parts of salaries that are deferred are discounted to reflect present-day values. 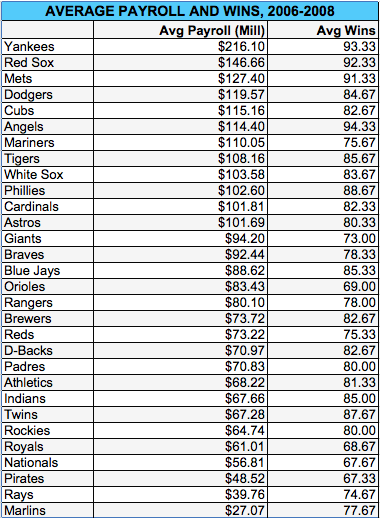 The mean team payroll from 2006 to 2008 was $89.86 million, a little less than the $88.51 million average ODP this year. This means that total payroll spending in MLB was about $2.7 billion per year over the last three years. The Rockies ranked 25th in MLB over that period in payroll expenditure with $64.74 million. What else is apparent once again is that the Yankees far outspend any other team in MLB--$70 million per year more than the second place Red Sox and $126 million more than the average MLB team.

Extrapolated over three years, those numbers are obscene: over the past three years the Yankees have spent $208.32 million more than any team and an incredible $378.72 million more than the average team. Their $648.3 million total payroll is about eight times the $81.21 million payroll of the lowest team, the Florida Marlins. With that much extra payroll, the Yankees had better be at the top for wins the last three years, right? Not quite: 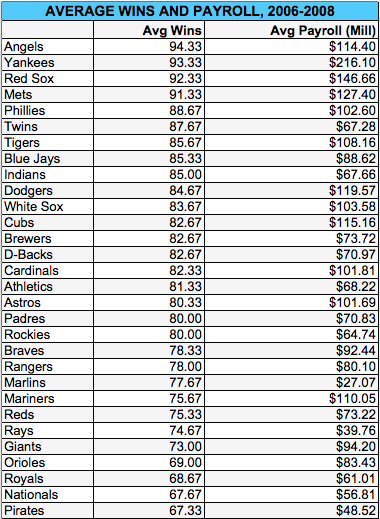 Per common sense, the mean wins number is 81. By this measure, the Los Angeles Angels (6th largest payroll) have the most wins over the last three years, closely followed by fellow payroll titans New York (both), Boston, and Philadelphia. At the bottom end of the spectrum are the sad sack franchises of MLB, the Pirates, Nationals, Royals, and Orioles failing to even average 70 wins. Meanwhile, the lower-compensated Rockies were tied for 18th in wins with 80. What do these numbers tell us? Well, in a very broad, obvious sense, it is certainly easier to win games with a high payroll. That's the kind of hard-hitting analysis you've all come to expect from Purple Row Academy, right?

Join me after the jump for some in-depth analysis of this data (with at least one cool graph or your money back)...

Rich Lederer's graph of this data, reproduced below, shows the linear relationship between wins and payroll: 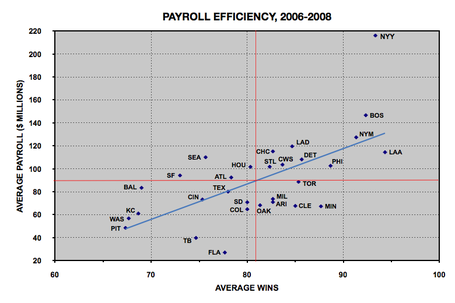 Teams are divided helpfully into quadrants of efficiency. For you stat geeks, I'll let him explain:

The blue trendline indicates the positive correlation of team payroll and wins. The correlation coefficient works out to 0.64. The coefficient of determination (or R-squared) is 0.41, which means payroll explains 41 percent of a team's win total.

To me, the Angels are the team in this exercise that comes out furthest ahead. They have a relatively high payroll but are below the trend line and have enjoyed playoff trips each of the past three years, averaging the most wins in baseball. The Twins are the model of marginal win efficiency, achieving over 87 wins per year with a payroll that averages under $68 million. However, far and away the most successful team was the Rays, who won 97 regular season games at a mere $526,000 per win and went to the World Series. For a comparison, the 2007 won 90 games at about $682,000 per win. However, the flaw with this graph is that all wins are not created equal.

The Inequity of Wins

Using the above charts, purely in terms of wins the Rockies are slightly below average over the last few years with their 80. In terms of payroll efficiency that is defined on a linear scale (all wins treated equally in concert with payroll data) they are considerably better than the major league average with their $64.74 million. However, all wins are certainly not created equally in MLB.

When one considers the fact that the range of the three-year payroll data was a gigantic $189 million and that the range of average wins was a mere 27 wins, it becomes readily apparent that even with a miniscule Marlins-level payroll a team should win at the least 60-70 games (with a few exceptions) per year. It is the increase from the 80 win level the Rockies are inhabiting to the common playoff threshold of 90 wins that costs teams many millions of dollars.

Though it can be (and has been) done by a small payroll team, going from 60 to 80 wins in MLB is an insignificant accomplishment on a macro level because those teams still miss the playoffs. In moving from 80 to 90 wins, however, a team goes from an also-ran to a bona fide playoff contender. After all, 68 of 78 teams (87%) in the last ten years that crossed the 90 win threshold made the playoffs, making these marginal wins much more important and therefore expensive.

So what am I saying here? Basically, although average wins are nice, the success of teams is measured by playoff appearances and world championships. A team like the Marlins, with incredible payroll efficiency of an average cost per win of about $350,000, is less successful in my eyes over the last three years than the Rays (about $530,000 per win) or even the Phillies ($1.16 million per win) due to their playoff success. Of course, one has to draw the line somewhere, and it is somewhere south of the Yankees' $2.3 million per win. By this measure, the Rockies also fare well, at about $800,000 per win over the three year period with a World Series appearance.

Keeping in mind that all wins are not created equal, teams like the Red Sox that are above the blue trendline but have playoff success could also be considered efficient. After all, the Red Sox have the most World Series wins in the 21st century. In addition, teams with several playoff wins have increased their team's revenue streams now and in the future.

As a result of this fact, Lederer also has a graph with a polynomial trend line instead of a linear one. Basically, this also includes the higher cost of a marginal win beyond 81 wins: 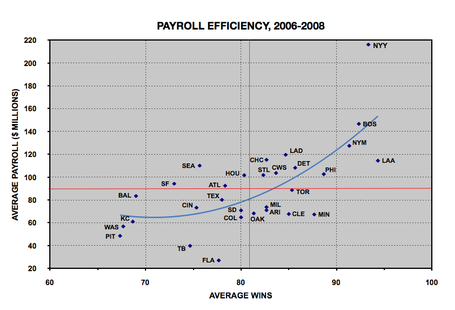 As such, each marginal win is worth about $3 million.

Plugging in several numbers suggests the marginal win is worth about $3.5M near the mean but increases to $6M for the incremental win between 89 and 90, which means it does a better job of matching reality than the linear relationship.

In my opinion, this graph more accurately shows the efficiency of payroll spending, as now 49% of a team's win total is based on payroll as opposed to the previous 41%. In addition, it realizes that incremental wins from 90 and up are much more expensive than even those from 80 to 90. From this graph the Angels, Mets, and Red Sox look much more efficient, while teams with lower win totals like the are relatively unaffected.

As you can see, the Yankees are by far the team that is farthest above both the linear and polynomial trend lines. Despite this outlier spending, their playoff success over the past three years was very limited. However, they did make boatloads of money, so they are at least partly successful. One could argue that the Yankees' profitability comes from their brand's power and dominance. To establish this dominance, has to be in the playoffs each year. They have obviously decided from a business perspective that it is worth it to overspend on payroll (they would need 122 wins to achieve payroll efficiency!) to increase their chances of making the playoffs and sustaining their brand. Taking out the Yankees from this analysis would significantly change the entire graph, making the relationship between wins and payroll much more linear.

My pick for lack of payroll efficiency, non-Yankees edition, is the Seattle Mariners, who averaged only 75.67 wins with a payroll over $110 million.

Final Payrolls by Year, Maury Brown (The Biz of Baseball)