Share All sharing options for: Rockies fishgutted by Marlins, 8-3

A fifth inning collapse by pitchers Jason Hammel and Matt Belisle and the Rockies inability to come through in the clutch sabotaged their chances for victory in the 8-3 loss to the Marlins. Jason Hammel gave up six runs on the night, one in each of the first three innings and three more in the fifth.

One of the fifth inning runs scored while Hammel was still in the game and two more when Matt Belisle came on in relief and wasn't able to record an out, allowing both inherited runners to score as well as two more of his own. Glendon Rusch, Matt Daley, Manny Corpas and Huston Street stopped the Marlins from there, but the damage had been done.

Troy Tulowitzki homered in the first and hit an RBI double in the third, but once again the Rockies (11-17) showed difficulty maintaining their early offense, failing to score after Brad Hawpe singled in Tulowitzki to tie the score at three in the third. Hawpe's single was the only hit with runners in scoring position for the Rockies, who finished a paltry 1 for 16 in that category on the night. 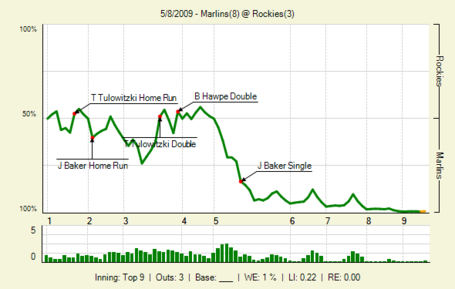