Jorge de la Rosa's best start of his career wasn't enough to earn his first win.  I really want to drive down to Denver and give him a hug.  The quiet lefty threw 8 innings, allowing two runs on four hits and a walk, and recorded a career best 12 strikeouts, also a season-high for the Rockies.  He had only pitched eight innings once before - April 22, 2007, as a Royal.

It wasn't enought Saturday evening, as the Rockies (11-18) fell to the Marlins (17-14) at Coors Field.  This time, it was Josh Johnson (3-0, 2.34), the most underrated starting pitcher in the league, who got in DLR's way.  Johnson scattered 7 singles in giving up one run in 8 innings, walking one and striking out five.  He was able to break Todd Helton's hitting streak at eleven and is now 22-11 with a 3.35 ERA in his 4-year career.

Seth Smith, Brad Hawpe, and Troy Tulowitzki each had two singles, none of them well struck. Dexter Fowler singled in the eighth off the bench and scored the only Rockies run on Tulo's second knock.  Ian Stewart struck out and Chris Iannetta grounded out against Matt Lindstrom in the ninth, both representing the winning runs.

One of the runs de la Rosa allowed was off of a leadoff triple by Dan Uggla in the fourth, which Ryan Spilborghs failed to catch only because he first broke in on the warning track shot.  Hanley Ramirez singled him home, as he continues to eat up Rockie pitching - with two singles, a double, two runs and an RBI. 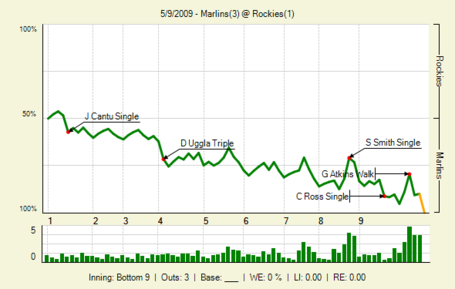 The Rockies are now 9.5 games out of first place, the largest deficit of any team in the majors, despite still sporting a positive run differential...

Colorado was in danger of falling to 0-9 in one-run games but was saved by Jason Grilli giving up an RBI single to Cody Ross in the ninth.  Instead the Rockies are now 1-11 in games decided by two or less runs.

The Rox dropped to 1-14 when allowing their opponent to score first.

Clint Hurdle used his 26th different lineup in the 29 games.  Consistency from the offense should obviously follow from inconsistency.

Aaron Cook tries to stave off a home sweep at the hands of what were the "cold fish."  Chris Volstad will oppose him at 1:10MDT.