Share All sharing options for: Colorado 4, Milwaukee 2: Rockies win seventh in a row

One, two, three, four, five, six, seven wins in a row for the Rockies! And all of them on the road! Who knew that the Cardinals and the Brewers would be the cure for what ailed the Rockies?

How the Rockies offense went: Troy Tulowitzki hit a solo home run (7) in the fourth inning to put the Rockies on board and only down by a run. In the fifth, Clint Barmes had a double, which was followed by back-to-back run-scoring doubles by Todd Helton and Brad Hawpe. The Rockies now had the lead at 3-2 and wouldn't give it up again. Brad Hawpe added an insurance run in the seventh with his ninth homer of the season. Carlos Gonzalez walked three times.

How the Rockies pitching went: Jorge De La Rosa allowed RBI doubles to both Ryan Braun and Prince Fielder in the third inning to put the Rockies down by runs, but that was all out of the Brewers' offense. The Brewers didn't have another hit until the eighth when Prince Fielder hit a double that almost caused Dexter Fowler and Carlos Gonzalez to collide with one another. De La Rosa went six innings, allowed four hits, walked four, and struck out eight.

The seventh inning was the closest the Brewers came to taking back control of the game. Randy Flores started the inning and walked Bill Hall. After recording a pop out, he left the game for Joel Peralta. In these high leverage situations, Peralta didn't falter. Despite a walk to his first batter, he got the next two outs without any runs scoring. Huston Street notched his 11th save by striking out the side in the ninth. 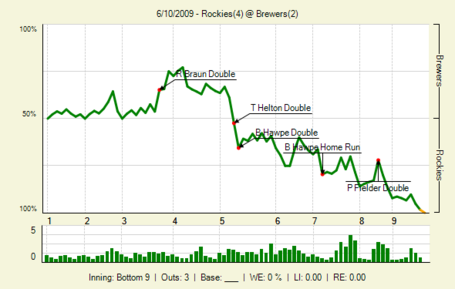 Visit Brew Crew Ball to find out their thoughts on the game.