Subtitle: Sorry MLB, we are "fluking" all over your pretty carpet again.

The Rockies seem intent to mess up the natural order of the haves and have nots of MLB once again in 2009, riding Aaron Cook's arm and the bats at the bottom of their lineup to an impressive eighth straight victory and second straight road sweep. First it was the St. Louis Cardinals and now Milwaukee, watch out AL, we're coming for you, next.

Cook's great performance kept the Rockies in the game early, some timely hitting gave them the lead and the bullpen managed to hold on despite a Ryan Braun three run shot in the ninth to preserve the victory. Despite the home run late, it was a seventh inning strikeout of Braun with two outs and the bases loaded by Joel Peralta that proved to be the crucial moment in the game for the Rockies. Their lead at that point was just a precarious three to one with the Brewers top run producer at the plate. Avoiding the big mistake there while capitalizing when they had the opportunity, for instance Paul Phillips hit a two run bases loaded single with one out in the next frame, was what once again led the Rockies to victory.

Jim Tracy overmanaged a bit, using three relievers to get through the seventh and getting in a position to where he was forced to use closer Huston Street for a fourth straight game. Street gave up the Braun home run and walked Prince Fielder before striking out Matt Gamel to end the threat.

Cook wound up pitching six innings, allowing seven hits and striking out seven while giving up just one walk in the victory. Besides Phillips' clutch single, Ian Stewart hit his twelfth homerun and scored three of the Rockies five runs and Troy Tulowitzki hit a run scoring double as one of two hits while also walking twice, with Ryan Spilborghs chipping in a pair of hits and scoring  the other two runs. In all the 5-8 hitters combined to go 7 for 14 with three walks, scoring all five and driving in four of the Rockies runs.

The Rockies come home for a three game series against the Mariners starting tomorrow. 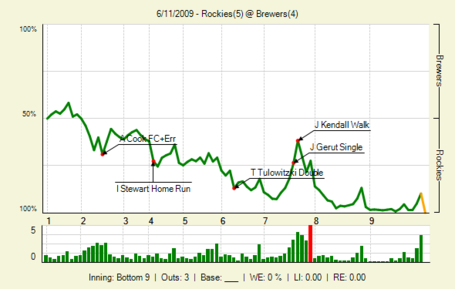 I should have opened an overflow, 1067 comments and counting.