9 in a Row! Ubaldo Jimenez and Rockies fight for gritty 6-4 win over Mariners

Share All sharing options for: 9 in a Row! Ubaldo Jimenez and Rockies fight for gritty 6-4 win over Mariners

Jim Tracy pushed buttons that Colorado Rockies teams haven't pushed in a long time for Friday night's come from behind Rockies win over the Seattle Mariners, some of the moves were so old school it's a wonder that the young team even realized they existed.

The pivotal sequence came with the Rockies trailing 3-4 with one out and runners on first and second in the bottom of the sixth. Tracy let Jimenez hit, but rather than going for a sacrifice, the pitcher slug bunted a single past the drawn in infield for Troy Tulowitzki's game tying run. With runners now on first and third, Tracy then had Dexter Fowler push a suicide squeeze bunt to score Ian Stewart who made a fantastic slide under the tag of Mariners catcher Rob Johnson for the first Rockies lead of the night.

Jimenez stayed in the game the rest of the way, picking up his first complete game of the season on 127 pitches, despite having a dubious start where he fell behind 3-0 by the third inning on an Adrian Beltre double. He and the Rockies offense showed some impressive resillience in clawing back, however. Troy Tulowitzki, who showed his Long Beach Dirtbag roots in this game, wound up scoring three of the Rockies runs, the first on a solo home-run in the bottom of the fourth to pull the Rockies to within one, the second on the Jimenez slug-bunt, and the third on a wild pitch after he got on base, stole second and reached third on a throwing error by Johnson. The other two Rockies runs were scored in the third when Todd Helton hit a two out single to score Chris Iannetta and Brad Hawpe reached on an error (First Baseman Russ Branyan was pulled off the bag on a Jarrod Washburn throw) to score Clint Barmes.

The Rockies improved to 29-32 with the victory, and are now just 3.5 games behind St. Louis in the NL Wild Card race. 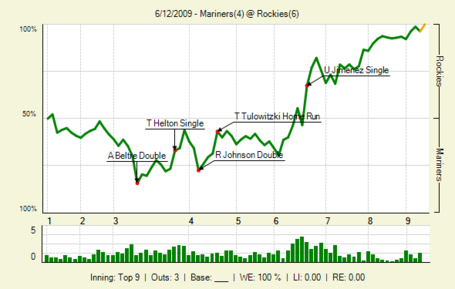