Share All sharing options for: Colorado 5, Seattle 3: Rockies win 10th in a row

So, Jason Marquis took a walk to drive in the first run, an RBI single by Todd Helton and an RBI double by Brad Hawpe in the seventh put the Rockies ahead 3-1, and sac flies by Chris Iannetta and Clint Barmes secured a 5-3 victory over the Mariners. Marquis also pitched well, allowing one run in seven innings, posting a .321 WPA. Manny Corpas, on the other hand, served up a gopher ball in the eighth inning to the game at three.

This victory means the Rockies have now won 10 straight games. Not one. Not two. Not three. Not four. Not five. Not six. Not seven. Not eight. Not nine. But ten! 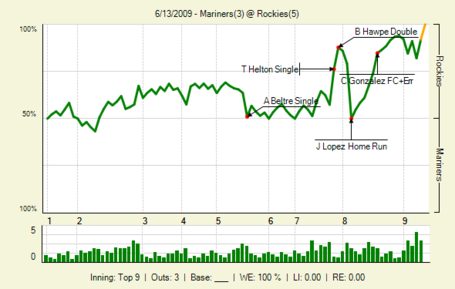 Can't wait to read about the game from the perspective of those Rowbots (seriously, I cringe when I write, say, or think it) at the game.

Lookout Landing for the opposing view if the game.
Mariners vs Rockies coverage to find a full boxscore and stories related to this series.