This one does in fact go to eleven! The Rockies swept their third consecutive series and won their eleventh game in a row overall with a 7-1 victory over the Seattle Mariners (30-33). The win moved the Rockies (31-32) within one game of .500 and maintained their place 3.5 games back in the wildcard standings.

After the Rockies' 5-run fifth (delivering cheap tacos!), the game was pretty much in hand, but there was a little drama provided by a rain/tornado delay. For all intents and purposes though, the game was over when the rain came down. 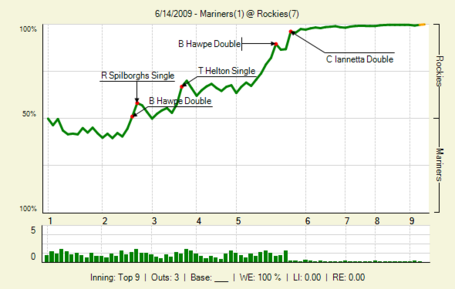 Where do the Rockies go from here? Well, first of all they'll enjoy a well-deserved off-day (their first in 17 days!), and then they'll host the Tampa Bay Rays for a three-game set--looking to see the plus side of .500 if the Rockies can keep the hot streak going. Two weeks ago I certainly didn't think I'd be writing that!