Share All sharing options for: Monday Rockpile: Rockies take a break after eleventh win; celebrate being on MLB.com's home page

In case you didn't know, the MLB.com page does: 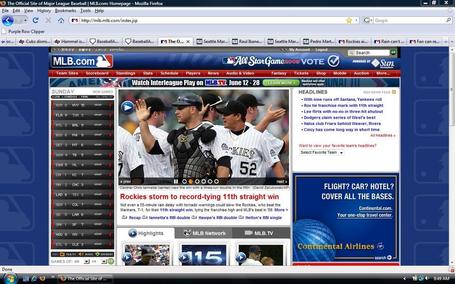 Daley relief role now vital with Buchholz done - The Denver Post
Matt Daley can discuss Tommy John surgery with Taylor Buchholz because he had that wonder surgery years ago. Daley's now more important than ever to having an effective bullpen.

Hammel is double trouble - The Denver Post
Here's the plan for the next 99 games: Start Jason Hammel and have him hit a double. When he doubles, he doesn't lose. 99-0!

Rockie Torrealba details son's ordeal - The Denver Post
As serious as the situation was with Torrealba's son was, I can't help but find a little humor in this:

"The (kidnappers) even joked with him [his son] about how I (stunk) because I was hitting only .220," Torrealba said. "Obviously, this is somebody that was watching me closely and planned it out as an easy way to make money."

"Three finalists per Major League club were chosen out of thousands of nominations from across the United States and Canada of "everyday All-Stars," people who have gone above and beyond to serve their community."