Rays 12, Rockies 4: Tampa Bay pounds Colorado back down to earth

Share All sharing options for: Rays 12, Rockies 4: Tampa Bay pounds Colorado back down to earth

BJ Upton, Ben Zobrist, and Gabe Kapler each pounded out three hits, and Jason Bartlett and Dioner Navarro picked up two apiece as the Rays' high-powered offense dealt the previously red-hot Rockies pitching staff a heavy dose of reality. Jorge De La Rosa (bad Jorge!; 2-7) allowed the same amount of runs (7) as outs that he recorded as his severe troubles at home continued, and the normally strong bullpen duo of Randy Flores and Matt Daley each allowed two runs in an inning of work to the defending AL champs. A couple of defensive bung-ups - most notably Ian Stewart's blunder on a Gabe Kapler foul pop fly that was immediately followed by a two-run triple - certainly didn't help.

Offensively, Brad Hawpe (who is now hitting .342) and Clint Barmes each had two hits, and that was about it for the Rockies. As a team, they only had eight hits despite chasing Tampa Bay starter Jeff Niemann after five innings. Todd Helton was arguably the biggest offender as far as offensive struggles are concerned, as he went 0-for-4 with a strikeout and saw 14 pitches - total. Helton has seen 14 pitches in numerous individual at bats over the course of his career, so that says something about how the Rays' pitchers were able to handle him. 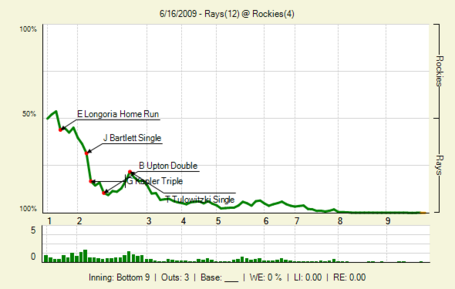 Tomorrow: Tampa Bay's rookie phenom David Price will face Aaron Cook. Same time, same place...different result? Let's hope so. I still have a good feeling that the Rockies end this series with a .500 record, and end the home stand as a team with a winning record.

If you want to hear some good news, Franklin Morales held one of the PCL's best offenses completely at bay - in a hitter's park - for the Sky Sox tonight (though, the offense didn't help him and the Springs eventually lost 1-0). Plus, according to the stadium gun, he was back into the low-to-mid 90's on his fastball. More in tomorrow's Pebble Report...