Ubaldo Jimenez: Like vinegar to the oily mess of 2009

This season, I've introduced a couple of new pitching metrics to supplement our evaluation of our pitching staff. I find them incredibly useful, as they take the same statistics that everyone sees and transform them into alternate forms of ERA that suggest that a pitcher is pitching better than the actual results on the board would suggest.

A lot of the complaints are that the other stats are being presented so that we don't have to face the reality that a 2-7 pitcher with a  5.81 ERA is terrible, while the stat people are arguing that he's pitching much better than that, but good hitters/bad defense/bad luck are all combining to inflate their numbers.

Well, I have a pitcher here that ALMOST everyone can get on board with.

Allow me to present to you Ubaldo Jimenez.

Pretty dominating stuff, if you ask me. But just how dominating is he?

Well, we all watched as Ubaldo struggled early against Seattle, but pulled a Peter Gammons special and really "picked up the team" as he went the distance, allowing 4 runs over 9 innings. There's a true gamer there, a guy who has potential to be a real winner, a solid competitor.

My brain just started bleeding. Better stem it with some in-depth analysis!

Join me after the jump and we'll look at some fun splits and CHARTS AND GRAPHS!

Moving from there, one of my favorite things about Ubaldo is looking at his in-game splits, inning-by-inning. For the sake of brevity, I've broken it up into 3-inning chunks (or I should say that BBR has), because from chunk-to-chunk, his game really changes. Observe.

Ubaldo comes out his first 3 innings pitching the spray-and-pray method, flinging the ball everywhere, and while posting a 1.60 K/BB (acceptable), opponents are getting on base in a downright solid manner, as evidenced by that .358 OBP. They aren't hitting him terribly hard (I'm not too terrified of a .108 IsoP - think like Scott Podsednik) - basically during the first 3 innings, the 175 PA mashed together resemble a weak Fred Lewis, sporting a jussssst shy of average .327 wOBA.

Innings 4-6, he settles into a groove. He strikes out a good number of batters still, but the important thing is the drop in BB. This all sums up to a K:BB of 2.80, which is downright filthy. What's more impressive is the 67 OPS+ and piddling .285 wOBA, essentially saying that once Ubaldo is dialed in, he's facing David Eckstein every PA. During these innings, his walks go down, as I said, and he starts to get more groundballs, as you can see by the GDP/AB% goes up. (If I had inning-by-inning GB%, I'd present it, so I regret to say that I'm merely looking at a correlation here to try and back up what we all know we're saying.)

Innings 7-9 are the toughest innings, obviously, and his only time against the 9th inning involved a BB to Ken Griffey, Jr., and a solid groundout from Ichiro. His 1.80 K/BB still shows some of the control he has during the 4-6, but he's obviously more tired at this point. Nobody gets good contact on his pitches, based on that .028 IsoP, but he definitely has trouble with the walks. His 81 OPS+ and .301 wOBA are still very good, but at this point it's mostly walks and missing spots. Think Luis Castillo for those last 3 innings. (Think about him dropping that popup. Chuckle.)

Now, I don't have an inning-by-inning velocity chart, but I do have his velocity chart from his CG against the Mariners, courtesy of Brooks Baseball. 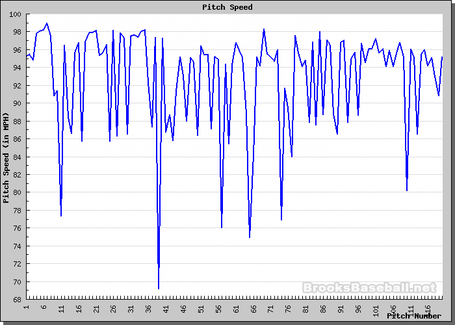 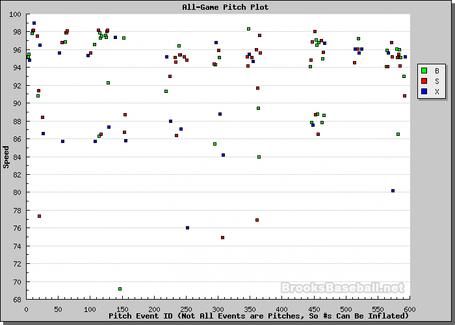 As long as we're on the topic of Pitch F/X, check out BrooksBaseball.net for one of the more exhaustive Pitch F/X machines available. From what I've heard, they're looking to keep expanding functionality, and this is just a fantastic tool in general. Many kudos from the sabrmetrically inclined.

You can see he's still pumping 95+ as late as the 9th inning. You just can't do anything with that.

The projections weren't as hot on Jimenez. Granted, we're only halfway through the season, but Jimenez looks like might be poised to beat the numerous projections that are calling for Jimenez' season to include ~160-170 IP and a mid-to-lower 4s ERA. He's on pace for 216 1/3 IP this season, with that 3.92 ERA and his .317 BABIP and 20.3% LD suggest that he's not getting excessively lucky or unlucky, or being overly bailed out by his defense, or whatever. In fact, he might even get better.

As if I needed to even say it.