So, the Rockies are winners of 12 of their last 13. Not too shabby. What this game comes down to is basically a Troy Tulowitzki three-run homer (9), a Clint Barmes sac fly, and an absolute monster of a solo shot (9) by Chris Iannetta.

Aaron Cook out-dueled 2007 #1 overall pick David Price for seven innings. Cook allowed two of the three runs on back-to-back solo shots by Carl Crawford and Evan Longoria in the fifth. But that ended the scoring for the night. Manny Corpas and Huston Street sealed the deal, with Street recording his 14th save.

The real thing to take from this game is really to ask this simple question: How do you allow Pat Burrell to steal a base? 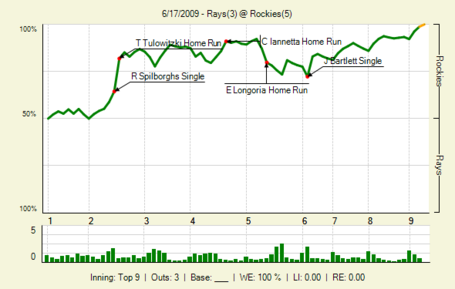