The sun rises in the east, sets in the west, and the Rockies win. Of late, these three maxims have been true very often. Behind another quality start, this time from Ubaldo Jimenez (6.2 IP, 1R, 6H, 7K) Colorado won their fourth straight series with a 4-3 victory over the Tampa Bay Rays.

The Rockies used three home-runs in the game to tally the victory. Clint Barmes hit a two-run homer (7) for the Rockies in the third, immediately followed by Todd Helton's 318 four-bagger--placing him 100th in MLB history. Carlos Gonzalez completed the Rockies' power surge with his first  MLB home-run of 2009 in the fourth inning--and it's a good thing, since Huston Street needed every insurance run he could get to record his 15th save in 16 opportunities (giving up two in the ninth on a Ben Zobrist single). 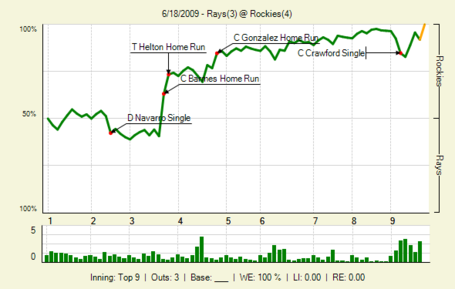