You can officially color me impressed with Jason Marquis (9-4) this year. The Rockies' highest paid starter got his ninth win with a masterful effort in 8.2 IP, inducing grounder after grounder to stymie the punchless Pirates. To wit, 22 out of the 27 Pirate outs were recorded by the infield. In all, Marquis recorded .280 WPA.

Meanwhile, the Rockies' offense was clicking--with Brad Hawpe and Troy Tulowitzki providing the punch, each collecting their 10th homers of the season to help provide us with affordable tacos. Hawpe collected three RBIs and Tulowitzki added two.

The Rockies had this game well in hand pretty much from the get-go. 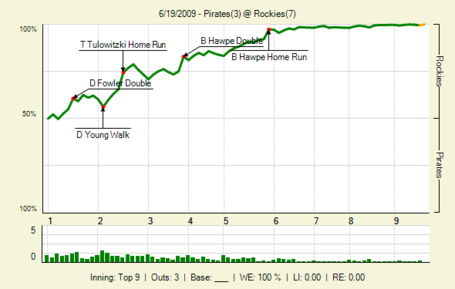 On a less positive note, from the post-game news conference, it sounded like Manny Corpas will be out a few days with shoulder inflammation.