A late rally by the Los Angeles Angels of Anaheim put an end to the Rockies' 6-game winning streak, as the Halos were able to come away with a 4-3 victory.

Things unraveled for the Rockies (37-34) in the bottom of the eighth, when Ubaldo Jimenez (6-7) walked Jeff Mathis (the ultimate thorn in the side of Jimenez) to lead off the inning. Then, Ian Stewart failed to properly play a bunt off the bat of Erick Aybar. To make matters worse, Stewart couldn't get a foot down on the bag on the next play, which was also a bunt, when Jimenez fielded a bunt from Chone Figgins and tried to force Mathis out at third. With the bases now loaded and nobody out, Bobby Abreu chased Jimenez with a two-run single that put the Angels up for good.

Troy Tulowitzki was the hero offensively for the Rockies, as he drove in all three runs, thanks to two home runs off of Sean O' Sullivan. Tulo now has 12 home runs on the year - 7 of which have come in the month of June. Todd Helton (1-2, 2 BB) and Seth Smith (1-1, BB) were factors at the plate, as well. Clint Barmes, Ian Stewart, and Carlos Gonzalez did not help the Rockies offensively, as they combined to go 0-for-13 with 6 K's.

Ex-Rockie Brian Fuentes slammed the door on the streak, as he was able to strike out Garrett Atkins and Barmes in back-to-back at bats, after allowing Chris Iannetta to reach second via a HBP and sac bunt by Ryan Spilborghs. 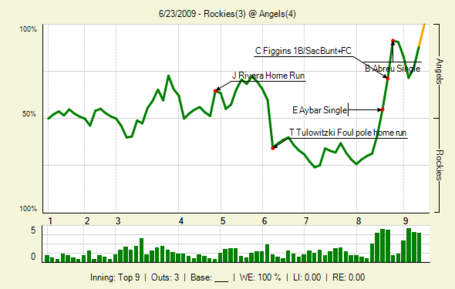 Tomorrow: Two WINNARS (Jason Marquis and Joe Saunders) will square off in the rubber match of the series - same time, same place.

I'll try to talk someone else into doing the game thread next Tuesday. :(

Like I said last week - don't panic, and GO ROCKIES!