For the second time in as many days, the Rockies made it interesting in the ninth inning against the Oakland Athletics--and for the third time in three games they pulled out a two-run victory.

This was the fifth sweep by the Rockies during their 20 out of 23 hot streak--with three of those coming on the road.

Aaron Cook (8-3, 3.77 ERA) went eight-plus innings, giving up only one run and striking out four and contributing  .415 WPA to get the win--his fifth straight. Huston Street picked up the save (his 19th) for the third straight game against his former team.

Vin Mazzaro (2-3, 2.95) was confounded by the Rockies' patience at the plate all day, leaving after just 5 IP with 109 pitches, giving up three runs and taking the loss.

At the plate, it was a mixed bag for the Rockies. Colorado had two players earn the Golden Sombrero with four strikeout days--Brad Hawpe and Dexter Fowler--and ended up with 13 for the game. In all, the Rockies' top four hitters went 3-19 with 10 strikeouts.

However, the bottom half of the lineup picked up their teammates, with Troy Tulowitzki, Ian Stewart, Carlos Gonzalez, and Seth Smith having nice games offensively.

With the win and losses by St. Louis, Milwaukee, and Los Angeles, the Rockies (40-35) climbed to a mere half game back in the wild card standings (behind the Giants) and 7.5 games back of the Dodgers as Colorado prepares for a three game set in Chavez Ravine starting tomorrow to close out what has been a remarkable month of June for the club (20-6 so far).

The LA series looms very large for the Rockies, who will try to make up some serious ground on the Dodgers as they try to continue their hot streak into the All-Star Break.

As has been the case quite often during the streak, the Rockies had this game well in hand for most of the game, with only a ninth-inning hiccup causing Rockies fans concern. 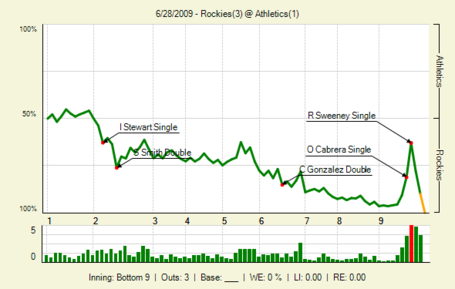