How the game went: Jason Marquis allowed three runs in the first inning, but settled down after that. The Rockies didn't do much offensively until the fifth inning when Ian Stewart launched a three-run home run to tie the game at three. Todd Helton put the Rockies ahead 4-3 on a sac fly in the sixth inning. To start the bottom of the seventh, Hunter Pence launched a homer to tie the game at four. The Astros took the lead later that inning when a double play turned into a not double play on a Joel Peralta fielding error (at first it was charged to Clint Barmes, but it was clearly a failed catch on Peralta's end). Pence added an insurance run in the bottom of the eight with an RBI single.

Rockies pitching: Marquis allowed four runs on ten hits and four walks, Manny got charge with a run, and Peralta had that error that put the Astros ahead. 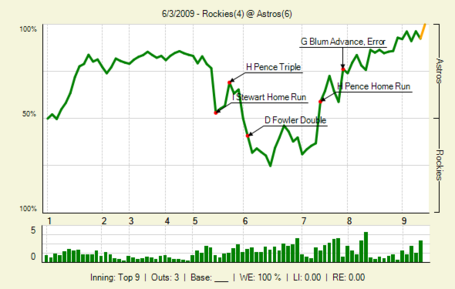