Behind a masterful performance by Jason Marquis, the Rockies defeated the Dodgers in LA for the first time this season. Marquis, who became the NL's first 10-game winner of 2009, turned in a two-hit shutout in just 86 pitches over 2 hours and 26 minutes against a lineup that has repeatedly given the Rockies problems this season. That lineup, however, has not been problematic for Marquis, who improved to 2-0 against the division leaders this season. He was able to keep the Dodgers off-balance tonight, inducing 17 ground outs while recording three strikeouts.

Brad Hawpe hit a solo home run in the top of the fourth inning to get the Rockies on the board, but Chad Billingsley was able to bounce back and keep the Rockies off the board for the next couple of innings. However, in the top of the seventh, Brad Hawpe led off with a single, advanced to second base on a wild pitch, and made it to third on a productive out by Troy Tulowitzki. Ian Stewart was intentionally walked, and after a Carlos Gonzalez strikeout (one of three in the game), Chris Iannetta was able to draw a walk after falling behind 0-2. That brought up Jason Marquis, who served a dish of cold revenge to the Dodgers with a two-run single to give the Rox a 3-0 lead which they would not relinquish.

The win was the 19th this month for the Rockies' starting pitchers - the most in any single month in the NL since the 1985 New York Mets. Awesome. 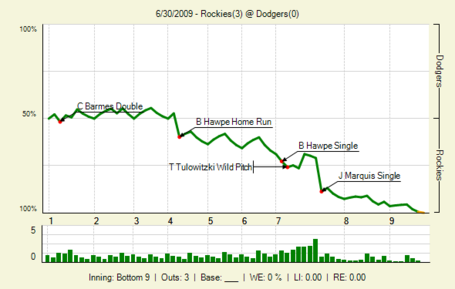 Still 1.5 GB in the wildcard standings, as the Giants beat St. Louis again. Tomorrow afternoon, the Rockies will try to win their first series against the Dodgers in 2009 as Jason Hammel takes the hill against Clayton Kershaw. The Rox can hit him. DO IT, ROCKIES!!