With a threat looming over his head to start hitting or head back to AAA, Garrett Atkins served notice that the message was received loud and clear. Atkins homered twice off of Houston Astros starter Wandy Rodriguez, who came into the game allowing just one other home run all season but saw that feat crumble against the Rockies. Atkins pair of dingers were two of four hit by the Rockies off Rodriguez, as Ryan Spilborghs and Brad Hawpe each also went yard off the Houston left hander. In all, the Rockies scored seven runs off of ten hits against Rodriguez and three more off of Brandon Backe in the 10-3 victory. Atkins, Spilborghs, Clint Barmes each had two hits and Ian Stewart three in the win that improved the Rockies record to 21-32. 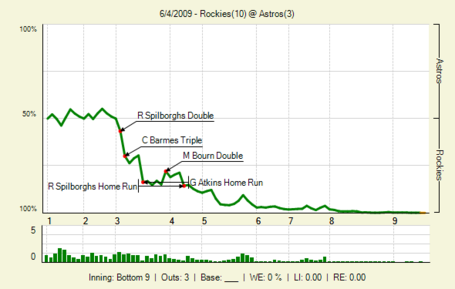