Share All sharing options for: Rockies walk through nine run seventh for 11-4 win over Cardinals

The other end of an inning like that, the one where the team you root for is the one driving the sled to certain victory rather than the one being dragged to certain death behind it feels pretty nice, I have to admit, but the first moment I want to look at from tonight's game was much earlier, the second inning dagger in the chart below that represents the Rockies first run off of Ian Stewart's double with runners on first and second. That at bat turned out to be the most crucial for the Rockies from a win expectancy standpoint, and for the second night in a row, Rockies hitters were able to come through when the game was still the most in doubt. Clutch hits don't always have to come late or with two outs in an inning, and from that point on the outcome of the game favored the Rockies.

Similarly, you'll see another bump in the leverage at the end of the fifth inning, this is when the Cardinals had their best opportunity to turn the tide on Jorge De La Rosa, with the tying runner on third and just one out. If Tyler Greene or Brendan Ryan are able to produce in that situation, the set-up for the big seventh inning may have been entirely different, and the outcome could have been altered by that as well. Props go to De La Rosa for working through it and never letting the Cardinals get in his head.

So, as for the nine run seventh... Twelve Rockies came to the plate, only five got hits, including a big blast by Stewart in his second plate appearance of the inning and a bases clearing double by Todd Helton. Four of the first five runs that would wind up scoring got on via walk and seven batters reached safely before an out was recorded.

Dexter Fowler, who homered in the sixth to give the Rockies a 2-0 lead before an Albert Pujols solo homerun cut the lead back to one, had the 12 pitch plate appearance that primed the pump for the rout in the seventh, working back from a 1-2 count by fouling off multiple 97 mph fastballs from Cardinals reliever Jason Motte before drawing the second bases loaded walk of the inning. From there Motte unrattled, giving up a rope single to Clint Barmes and Helton's three run double before he had to be pulled for rookie Jess Todd who made his MLB debut. Todd was welcomed to the show by Stewart's three run homer before finally killing the inning.

Carlos Gonzalez made his Rockies debut late in the game, grounding out in his first plate appearance in the eighth. The Cardinals tacked on three meaningless runs in garbage time off of De La Rosa (who got his first win of the year, improving to 1-6) and Josh Fogg. The Rockies improved to 22-32 with the victory. 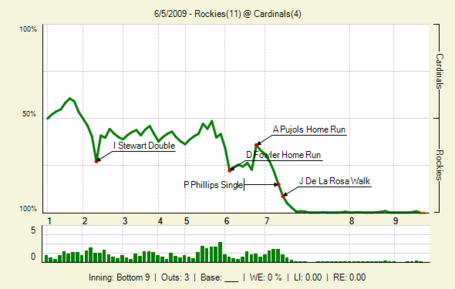