Share All sharing options for: Rockies 10, Cardinals 1: Rox Cook up a mighty Stew of Redbirds again

It's officially good to be a Rockies fan again.  At least for now.  Colorado bludgeoned St. Louis for the second straight day Saturday night, easily taking the W with a 10-1 win over Todd Wellemeyer (5-6, 5.32).

The story coming in was on Carlos Gonzalez first start in a Rockies uniform.  He went 0-4 with a FO, GO (would have been an IF 1B if not for Albert Pujols), and 2 K's.  Instead, another talented young lefty masher took center stage.

When Troy Tulowitzki got hurt June 2, Jim Tracy took it as an opportunity to put Ian Stewart in the lineup.  Despite Tulowitzki being cleared to play, Tracy went with the hot-hitting Stewart again, and it paid off in a big way.  Stewart smacked a 3-run 2-out HR in the 4th to give Colorado a commanding lead in a game that Aaron Cook's sinker was working.  In his next at-bat, he roped a 2-run 2-out HR following a Brad Hawpe double.  Both home runs came on breaking pitches, and the second was a display of pure strength by deposited the soft toss deep in the left-center field seats.

He also doubled down the left field line and turned a similar batted ball into an out with a highlight reel backhand and jump throw.  After his ninth inning double, he scored from third base on a grounder to third when the throw bounced off his helmet.  Practically everything the 2003 1st round pick did tonight was golden.  I kid you not - the commentator during SportsCenter said called Stew "the best player in the world."  The label is obviously in jest, but it will be tough for any player to top his game tonight.

Clint Barmes also hit a 3-run HR in the ninth off Blake Hawksworth (who was making his MLB debut) to give the Rox the winning 9-run margin.

Nearly lost in the offensive explosion was the whale of a ballgame pitched by Aaron Cook (4-3, 4.50), who went eight innings and allowed just four hits and a walk.  The only run he allowed was a solo home run by Rick Ankiel that Carlos Gonzalez might have caught if not for a fan's grubby fingers.  He faced 28 batters, got 15 ground balls and only allowed 5 batted balls to leave the ground.  He has now gotten his ERA to a season low 4.50 and has allowed one or less runs in 4 of his last 7 starts.

Some juicy notes on the game: 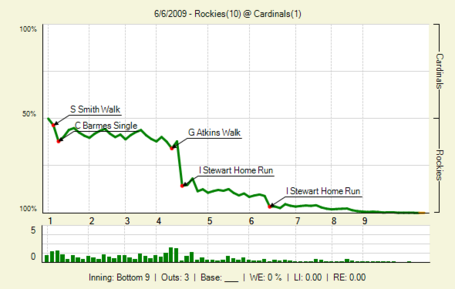 You know it was a good game when your worst two players by WPA each got a hit and one scored twice.

Quiet Star:
Matt Daley made his first appearance since being activated off of the disabled list in the ninth inning.  As he toed the rubber, directly in front of him manning the third base was umpire Tim Welke, the same ump that sent Daley to the DL his last time on the field by throwing the bat under his foot.  Daley retired all three men he faced on just eight pitches.

WolfMarauder was the only centurion again, but barely this time.

OH MY GOD THIS IS FREAKING FREAKING AWESOME