In my preview of this game, I set for the Rockies the goal of winning this game (making it a season-long four game winning streak), clinching the series, and providing delicious cheap tacos for Coloradans for the fourth straight game. After today's 7-2 win over the Cardinals, it is safe to say that Colorado achieved each goal with style and panache. With the victory the Rockies closed within 6.5 games of the wildcard (seriously).

Ubaldo Jimenez (4-6) was stellar for the Rockies, going eight strong innings, striking out nine and walking only one while giving up only four hits (and adding one of his own for a total .241 WPA). After giving up hits to the first two St. Louis batters and receiving fantastic defensive support from Carlos Gonzalez on an Albert Pujols deep drive (that still counted as a two-RBI sac fly), Jimenez settled down, retiring 17 in a row at one point. The win was Ubaldo's first in a day game this year. Joel Pineiro (5-6) took the loss for the Cardinals.

However, Jimenez's fine outing was overshadowed by the fantastic game by journeyman catcher Paul Phillips (4-5, HR, 3 RBI, .371 WPA) and the rest of the Rockies' offense. The Rockies pounded out 15 hits (13 of them singles) and did an excellent job of situational hitting to cash in on their opportunities. In addition, both Gonzalez and Dexter Fowler added Web Gems to make it a strong defensive effort for the Rockies. 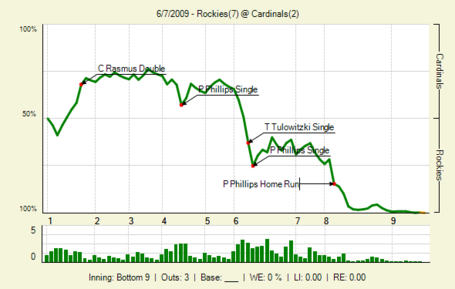 Tomorrow, Colorado looks for the completion of the four game road sweep in a rare Monday day game. Afterwards, Rockies fans will celebrate en masse with their fourth straight day of tacos.