Marquis now sits alone at the top of the NL leaderboards with 8 wins.  He still has a chance to achieve the most wins by the All-Star break in franchise history.

After a Todd Helton RBI single in the third, Brendan Ryan tripled and scored on a wild pitch.  Through four innings, the game hardly seemed in hand.  In fact, Marquis and Brad Thompson (0-2, 4.50) had practically identical lines through four innings.  The fifth inning changed it.

Paul Phillips singled and Dexter Fowler walked.  Clint Barmes hit an RBI single and Brad Hawpe added a two-strike sac fly to give the Rockies a 3-1 lead.  That is all the runs that Marquis would need, but Troy Tulowitzki hit a HR in the sixth and Barmes added his second RBI single in the eighth.

Every batter who appeared in the game fo r the Rockies, including Jason Marquis and pinch-hitter Seth Smith, recorded a hit except newly crowned NL Player of the Week Ian Stewart, who went 0-for-5 with 2 K's.

Randy Flores, Manny Corpas and Huston Street slammed the door on the Cards by combining for 2.1 perfect innings, sending down all 7 men they faced on just 26 pitches.  Box Score 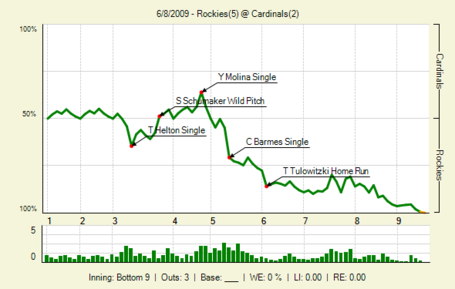 Quiet Star:
Dexter Fowler walked twice and scored both times and singled once.  That's what you want to see out of a leadoff man.

I can safely say MOTHER OF CRAP there’s no way anyone thought that would happen.