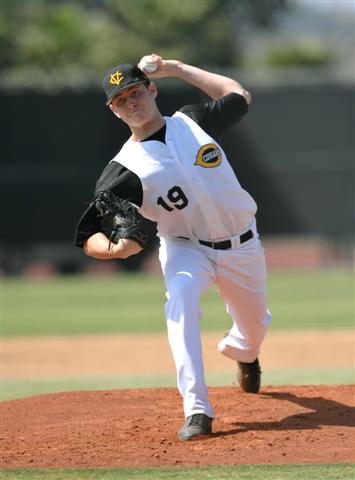 With the eleventh overall selection, the Colorado Rockies surprised everybody and selected left handed prep starTyler Matzek out of Capistrano Valley High School in California. Matzek has as high a ceiling as any high schooler in the draft and scared several teams off by making overtures that he wanted precedent setting money. He has a four pitch selection with a high nineties fastball. Matzek will have to be signed out of his commitment to Oregon University. I'll update this post with more info as it comes along.

Matzek was special down the stretch in the California sectional playoffs, hitting as high as 97 or 98 mph late in the season. He definitely had the highest ceiling left on the board; I'd be excited if I were a Rockies fan.

I practically begged the Rockies to take a chance with a high upside kid, ignoring potential contract demands. Not that they would ever listen to me, but the Rockies did just that, taking Tyler Matzek with the 11th pick overall.

This is a franchise type of pitcher, a talent with real #1 type of potential, the Rockies have gone out on a welcome limb here and the negotiations of whether they sign him over the next couple of months could have much impact on the direction of the franchise in coming seasons.