Three very integral parts of the Rockies' future made major contributions throughout the game, particularly in the seventh inning, to lead Colorado (26-32) to a 3-2 victory over the Milwaukee Brewers.

Dexter Fowler, Troy Tulowitzki, and Carlos Gonzalez each had two hits in the game (both were doubles for Dex and CarGo), and each player was a major part of the late rally. Tulo led off the seventh inning with a double down the left field line, and Gonzalez followed that up with a two-bagger of his own down the right field line to drive in Tulowitzki for the first Rockies run. Later in the inning, Dexter Fowler laced a double into the left-center field gap to plate Gonzalez, which tied the game. In the next at bat, Clint Barmes scorched a sacrifice fly to center field which score Seth Smith, who drew a pinch hit walk two batters earlier.

After allowing a leadoff triple to Craig Counsell (who later scored) in the first inning, Jason Hammel (3-3) settled down and pitched a gem the rest of the way (aside from a home run served up to Mat Gamel) until his departure after six innings. He finished the night allowing only the two runs on five hits and a walk while striking out five. Matt Daley, Manuel Corpas, and Huston Street then came on and provided three literally perfect innings of relief, as no Brewers reached base against the suddenly vaunted trio. 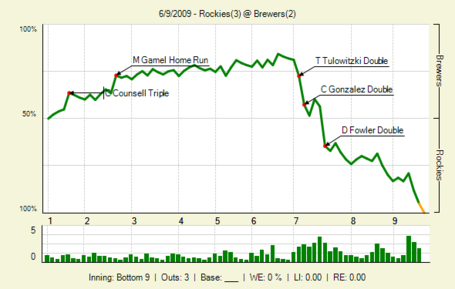 As Rox Girl said in the comments, it was truly a great night to be a Rockies fan, after their terrific first day of the draft and a tough come-from-behind victory.