Rockies 0, Dodgers 1: The Bully stays on the advantage . . . barely

Share All sharing options for: Rockies 0, Dodgers 1: The Bully stays on the advantage . . . barely

You couldn't have asked for Jason Hammel to pitch any better this afternoon. He threw a complete game in the loss, struck out five, and had a .231 WPA. Hell, Hammel even walked twice and had the second-best offensive WPA at -.031. The real problem stems from not taking advantage of a shaky Clayton Kershaw. The Rockies certainly were able to work the count against him, as he had five walks. But Brad Hawpe's double in the first inning was the only hit they managed off of the young 'un. Ian Stewart added a double in the seventh and Brad Hawpe had a single in the eighth for the rest of the offense.

Even though the Rockies lost this series, there are positives to be found, most especially the starters. Tell me the starting pitching wasn't great this series and I'll call you a liar. Ubaldo Jimenez, Jason Marquis, Jason Hammel--nicely done. The offense, not so much this series.

So, yeah, the Dodgers won this series, but they better watch their backs.

Join me after the jump for the graph and the Row Call. 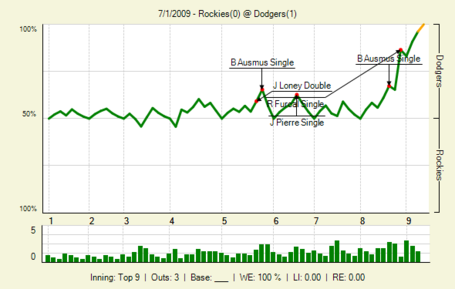