The difference between the Braves and Rockies on Friday night can be summed up in the two teams' abilities to come up with hits with runners in scoring position. The Braves went two for ten with runners in scoring position, the Rockies one for nine. Both Braves hits with RISP came in the form of doubles with runners on first and second, one by Garrett Anderson in the first inning off Ubaldo Jimenez, one by Diorys Hernandez in the eighth off of Juan Rincon.

Todd Helton hit his tenth homerun of the season. The Rockies had several opportunities with multiple runners on and nobody out, but were unable to come up with timely hits or even sacrifice flies when they were available. A 10/1 K/BB ratio also played a large role in the loss. The Rockies drop to 46-40, and lost ground on both the Giants (thanks to a Jonathan Sanchez no hitter) and Dodgers (thanks to a late rally against the Brewers)  tonight. 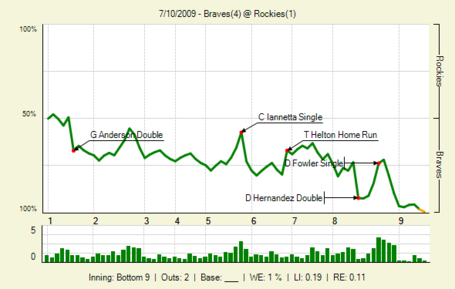