Rockies fall to Jurrjens and Braves, 4-3

Share All sharing options for: Rockies fall to Jurrjens and Braves, 4-3

Whatever just happened, it needs to stop happening. At some point the Rockies as a team of hitters need to start feasting on strong starting pitching as well as weak if they hope to make it to, or especially through the playoffs.

For six innings, Braves starter Jair Jurrjens controlled this game outside of one glimmer of hope when Dexter Fowler tripled in the third.

Even then, the end result, as has been the case the past two games was just not enough to get the score across. If the Rockies aren't careful, those three words will come back to bite them in their quest for a playoff spot as well.

The Rockies can only come away with a split of this series now, and they can only do this with a wreck salvaging win tomorrow. 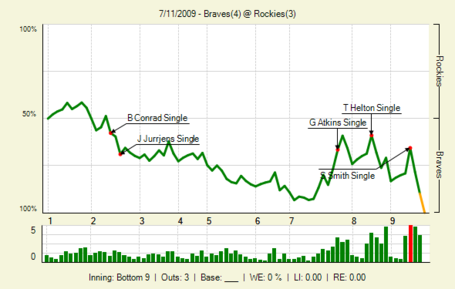