What a win for the Rockies to end the first half of the season!

Brad Hawpe was the hero today, as his two-out, bottom of the ninth double off of Atlanta reliever Luis Valdez (making his major league debut) drove in late inning monster Seth Smith to win the game in walk-off fashion. Huston Street (3-1) pitched a scoreless ninth and took the win as the Rockies climbed back from two separate four-run deficits (5-1 & 7-3).

After GIDPing twice, Smith redeemed himself in a big way, first launching a two-run shot (7) in the seventh inning, then singling and scoring the winning run. Hawpe also homered (14), as did Troy Tulowitzki (16). In addition, the much-maligned Clint Barmes had himself a great offensive day, going 2-3 with two runs scored.

The game was looking to be in doubt early on, as starter Jason Hammel was, to put it frankly, horrible. He lasted only three innings, giving up five runs on nine hits. After that, the bullpen settled down and shut down the Braves reasonably well, (though JDLR did allow a two run homer to Brooks Conrad in the fifth).

Similarly, the Rockies offense was looking pretty anti-clutch at the game's beginning, grounding into four double plays and executing poorly with men on base. However, Colorado was patient, working seven walks, making the Braves work through traffic nearly every inning--consistently putting pressure on Atlanta's pitching staff--and Colorado finally broke through in the seventh.

Down 7-3, Dexter Fowler walked with one out, followed by a Barmes single and a comedy of errors by Atlanta to allow Dex to score and Barmes to go to third. Smith wasted little time whacking a HR and the score was 7-6.

Ryan Spilborghs was another offensive hero for the Rockies. In the eighth Spilly pinch hit with two on and one out, launching a double into right-center, plating Ian Stewart with the tying run--though Chris Iannetta was gunned down at the plate, setting up Hawpe's dramatic double in the ninth.

All in all, it was a fantastic win for the Rockies, taking them to a first half record of 47-41. With the Giants' loss today, the Rockies are within two of the Wild Card lead. 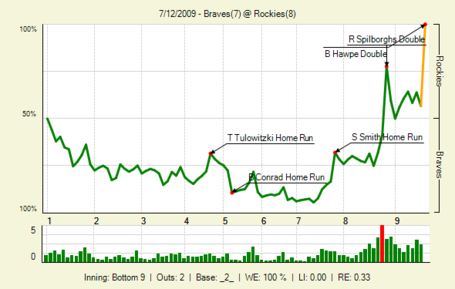