NL West exceeds expectations as a whole in 2009's first half

Share All sharing options for: NL West exceeds expectations as a whole in 2009's first half

Of course, those standings hardly surprise you I'm sure, given you probably keep good track of this daily.  Besides, the order of the teams placed in the division are pretty well in line with popular opinion prior to Opening Day.  In fact, they fall perfectly in line with Baseball Prospectus' pre-season projections.  Yawn.  We knew the Dodgers would be good and that the Padres would be terrible.

What might be more interesting is measuring the teams' record against what was expected.  Which team is overachieving their expectations?  Which team is performing far worse than anyone thought?  And how has that changed over the course of the season?

This is why graphs are cool.  I put together the graph below that depicts the number of games over (or under) the projected win percentage for each NL West team, after every game of the season.  Each individual team's graph will mirror their win percentage graph, but this is normalized to each team's expected playing level.  So any team above zero is exceeding projections - any team below is disappointing.

Blue denotes the Dodgers, green the Padres, orange the Giants, purple the Rockies, and red the Diamondbacks.  Click wide view to see the graph in all its primitive glory. 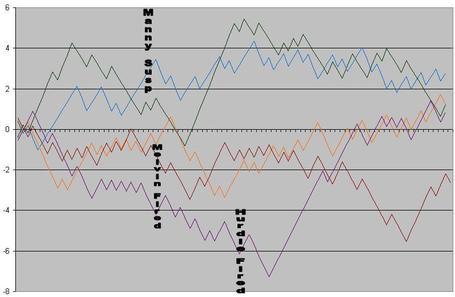 A couple things to take from this, most of which you already know:

So we've covered the present and the past.  Might as well complete the trifecta by looking at the future.  How about Baseball Prospectus' projected final standings, which takes the first half's games into account.

So there you go.  The Giants and Rockies are given 32.34% and 39.04% chances of winning the wild card, while no other NL team has more than a 3.65% chance.  Compare that to the Rockies' 3.56% chance of winning the NL West.  Mr. Kruk, BP says the Rockies have twice the chance to win the NL West than the Mets making the playoffs...Hmm...

For a smaller timescale, check the week in review of the NL West after the jump.

Last Week: 5-2.  3-0 vs Padres, 2-2 vs Marlins.  In spite of a strong 5-2 week, Arizona gained just a half game on Los Angeles and gained no ground on Colorado or San Francisco.

News: Arizona finally cut the cord and released the ineffective Tony Clark.  The big pinch-hitter has looked completely overmatched this season, except for Opening Day of course.  AZ SnakePit reacts.

(Note:  As bad as that stat line is, it's still better than Chris Young)

Jon Heyman of SI says offers for Chad Qualls may be "too tempting to ignore."  However, Arizona might lean towards keeping Doug Davis, as they won't get the 1st to 2nd round talent they desire in a trade and would gain from a compensatory pick should Davis leave in free agency.

The Diamondbacks traded reliever Tony Pena to the White Sox for power hitting first baseman Brandon Allen.  Allen will DH or play 1B in AAA, especially now that Josh Whitesell can play with the big club with the Clark transaction.

There is no new injury news to report.  Arizona did option Ryan Roberts to AAA and recall Leo Rosales

This Week: ASB.  4 game home series vs Astros.  Houston has quietly climbed to .500 and sits just one game below .500 on the road, so this series isn't necessarily as cupcakey as one might think.

News:  All-Star closer Jonathan Broxton will miss the All-Star Game with a toe injury.  There's no word on how long he'll be out, but with Ronald Belisario injured as well, two of the Dodgers' top three relievers are on the shelf with injuries.

Bill Shaikin of the LA Times suggests a package of Russell Martin, Josh Lindblom and Devaris Gordon to land Roy Halladay, then suggests LA wouldn't even do that deal because Gordon is "untouchable" and "the coaching staff would be reluctant to lose Martin."  Yeah okay.

Apparently, there were two LA scouts at a Toronto game, but not for Halladay.  For Scott Rolen.

Brendan Scolari at TrueBlueLA has exceprts from a Ned Colletti radio interview regarding the Dodgers and the trade market.

Eric Milton's 15-day DL stint will expire over the All-Star Break, but the Dodgers have yet to make a roster move accordingly that I can see. Integral rookie reliever Ronald Belisario landed on the 15-day DL with an elbow injury last Monday.  Cory Wade was called up to replace him in the bullpen, and has since thrown 1.2 scoreless innings.  Scott Elbert also joined the pen.

News:  Susan Slusser of SFGate reports that the PTBNL in the Scott Hairston deal is Sean Gallagher, the same pitcher that was regarded as the centerpiece of the Rich Harden trade last year.  Gallagher has upside but his stock has fallen due to injury.  He will switch to San Diego's disabled list with a knee injury.  Reaction from A's fans, and the reaction from Padres fans.

Former 2002 Blue Jay first round pick Russ Adams has signed a minor league deal with the Padres.  The infielder was DFA'd July 3rd by Toronto and has reported to San Diego's AAA affiliate.  Also signed and assigned to AAA was catcher Yamid Haad.

GasLampBall apparently has video of Matt Bush being arrested.

Adrian Gonzalez is a good dude.  The Padres' 1B will be in the Home Run Derby tonight and will donate $200 to charity for ever home run hit.  His NL compadres are all first basemen - Prince Fielder, Ryan Howard and Albert Pujols.

Cliff Floyd is still on the 60day DL - I'm not sure why the widget lost him.  Luke Gregerson was activated from the 15day DL Tuesday setting off a flurry of other roster moves.  San Diego recalled Mike Ekstrom, placed David Eckstein on the 15day DL with a hamstring injury, optioned Joe Thatcher to AAA, added Ryan Webb (he of the Hairston trade) to the roster, DFA'd Walter Silva and called up RH SP Tim Stauffer.

Last Week: 2-1 vs Marlins, 3-1 vs Padres. The only thing to complain about the Giants lately has been their inability to slam the door.  They have lost the final game of their last four series.

This Week: ASB, 3 game road series @ Pirates.  IT doesn't look like it, but this could be a good place to make up ground on SF.  The Rockies draw the paltry Padres for four games while the Giants take their 18-24 road record to PNC Park, where the Pirates are 22-17.

News:  You have surely heard it by now, but if not, Jonathan Sanchez threw a no-hitter Friday.  If it hadn't been for an 8th inning error on Juan Uribe, it would have been a perfect game.  It was just the 6th time in MLB history a pitcher got 11+ K's, zero walks and zero hits.  Sanchez' start was the only non-perfect game of the bunch.  Not bad for a guy who was 2-8 with a 5.30 ERA coming in.  He had been banished to the bullpen and only got the start due to a Randy Johnson injury.

The no-hitter is a boon for Sanchez' trade value (maybe), and Henry Schuman at SFGate suggests he could be part of a trade bringing back Freddy Sanchez and perhaps All-Star Zach Duke.

Tim Lincecum will start the All-Star Game.  He was the only NL All-Star not to appear in 2008 due to illness, so this is a nice way for the Cy Young winner to jump in.

Dave Allen at Fangraphs has a great read on former Rockie Jeremy Affeldt and his newfound propensity for getting ground balls with the best in the league.

Not enough people voted from the West coast.  Shane Victorino beat out the Kung Fu Panda for the last slot on the All-Star Team.  Jayson Werth replaced Carlos Beltran on the roster, so Philadelphia now has five of their eight hitters on the All-Star squad.  That is disgusting.  Only Jimmy Rollins, Pedro Feliz and Carlos Ruiz were left out.  Sick.

Two of the Giants top three starters in their rotation are injured.  Randy Johnson's shoulder injury has landed him on the 15day DL, while Matt Cain is being monitored after taking a line drive off the elbow.  X-rays are negative.  He hasn't been put on the DL - watch this.  Kevin Frandsen was called up.  The Giants won't need a fifth starter until July 20, so they optioned Ryan Sadowski to Single-A and recalled John Bowker.